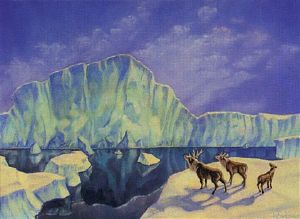 The Boreal was a region of permafrost-covered tundra in the extreme north of Terisiare during the Ice Age of Dominaria.

A narrow finger of land sandwiched between the Ronom Glacier and another mighty ice shelf, its southern terminus guarded by the dark tower of Tresserhorn, the Boreal was largely devoid of life. The Cult of Rimewind made its home here at Rimewind Keep, and over the centuries their unnatural magic altered what few creatures called the Boreal home, adapting them to the cold.

In addition to the Rimewind cultists, a handful of elves, centaurs, and goblins eked out a living in the Boreal, all of them changed by Rimewind magic.

The Boreal was flooded after the Thaw, and is now lost beneath the sea.