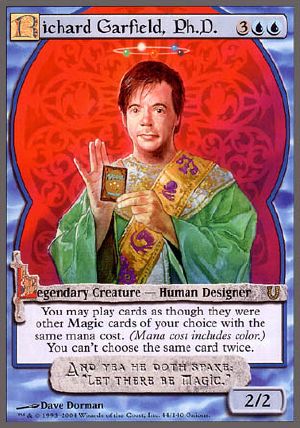 Richard Channing Garfield, Jr., Ph.D. (born 1966) is a mathematics professor and a game designer who created the card games Magic: The Gathering, Netrunner, BattleTech, Vampire: The Eternal Struggle (originally known as Jyhad), The Great Dalmuti, Star Wars Trading Card Game, Keyforge, and the board games RoboRally and King of Tokyo. Magic: The Gathering is his most successful game and its development is credited with creating the collectible card game genre.[1][2]

Garfield designed his first game as a teenager. He had a wide range of interests, including mathematics and language. In 1985, he received a bachelor of science degree in computer mathematics. He joined Bell Laboratories and worked there for a couple of years, but then decided to continue his education by attending the University of Pennsylvania in Philadelphia, Pennsylvania.

He began designing a game called Magic: The Gathering as a student in the late 1980s. An "East Coast" group of play-testers, comprising mostly fellow Penn students, formed around the developing game. While searching for a publisher for RoboRally, he found Peter Adkison of newly founded Wizards of the Coast. Adkison agreed to publish his board game and expressed an interest in a game like Magic that would have little set-up and short games.[3]

Garfield studied under Herbert Wilf and earned a Ph.D. in combinatorial mathematics from Penn in 1993. His dissertation was entitled "On the Residue Classes of Combinatorial Families of Numbers." But Garfield believed that game design would not offer a steady living and became a professor of mathematics at Whitman College in Walla Walla, Washington. He had previously been in contact with Magic play-testers from the west coast and his move brought him closer to them and Wizards of the Coast.

Magic: The Gathering became incredibly popular after its commercial launch in 1993. Garfield left academia to join Wizards of the Coast as a full-time game designer in June 1994. After the game took off, Richard Garfield moved to Kennewick, Washington. There he was known to play Magic: The Gathering with some friends and others from around there.

Garfield was also a primary play tester for the Dungeons & Dragons 3rd edition bookset. Together with Skaff Elias, he is now owner of Three Donkeys. Based in Redmond, Washington, Three Donkeys is a game design, development, and consulting company specializing in unique solutions to problems in the areas of both electronic and board game design.[4]

Garfield still sporadically contributes to Magic: The Gathering, for instance as part of the design team for the 2005 expansion Ravnica: City of Guilds, the 2011 fall expansion, Innistrad and the 2018 spring set Dominaria.

Garfield has personally created four Magic cards celebrating events in his life: one for his first marriage proposal "Proposal", one for the birth of each of his two children Terry and Schuyler "Splendid Genesis" and Fraternal Exaltation (both professionally printed) and "Phoenix Heart" to celebrate his second marriage. These cards were given out to friends and associates, and they are considered extreme rarities by collectors.[5]

There was a common house rule among the fan-base in the 90s that if Richard Garfield personally alters a Magic card by hand, the change is permanent for that particular card. This has spawned many urban legends.[9] The subject of Garfield possessing godlike powers within the Magic universe is immortalized in his eponymous card, Richard Garfield, Ph.D., from Unhinged. Garfield has also been immortalized in the card Phelddagrif, the name being an anagram of "Garfield, Ph.D.".