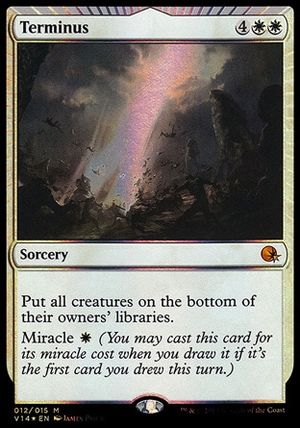 Miracle is a keyword mechanic introduced in Avacyn Restored.[2]

Miracle provides an alternative cost for a card which can be used while drawing it if it is the first card drawn during a turn. The timing of casting it is similar to the timing of casting cards with Madness. If a player intends to cast a card for its miracle cost, the card must be revealed immediately. Costs are paid when the effect causing the draw is finished and the triggered ability to cast it resolves.

Miracle was popular if polarizing and had developmental issues.[3][4] It, for example, requires you to change how you draw your cards (even if you just want to make your opponent think you might be playing it).[5] Mark Rosewater thinks it will come back if R&D can solve the issues surrounding it (which may or may not be solvable). They once have even toyed with the idea of different colored card backs for Miracles.[6]

Initially, Miracle was in all colors but black. R&D considered making a black miracle when they returned to Innistrad, but decided that they didn't want to bring the miracle mechanic back as it caused issues in tournaments (it forced all players to slow down their play to not telegraph they weren't playing the mechanic).[7] The black miracle finally appeared in Commander 2018.[8]

Miracle
A keyword ability that lets you cast a spell for a reduced cost if it’s the first card you draw in a turn. See rule 702.93, “Miracle.”

Instant
Put target artifact, creature, or enchantment on the bottom of its owner's library.
Miracle

(You may cast this card for its Miracle cost when you draw it if it's the first card you drew this turn.)