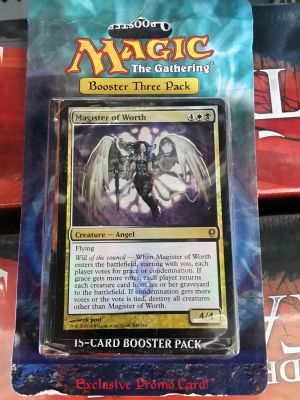 Resale packs, often marketed as "value packs" or "mystery boxes", are repacked Magic products that are regularly sold in American "Big-Box" stores such as Walmart, Target, and Meijer.[1] Sometimes, they are also sold online on at Amazon. These products are repackaged because the original packaging has been damaged or otherwise wasn't sold. Wizards provides the packaging art to third parties to help them sell these loose items. As of September 2018, WotC started selling directly to the "Big-Box" stores and Amazon. It is as yet unknown, if the practice of resale packages will be continued.[2]

Nostalgia Packs were early packages, consisting of four boosters from early sets. Not seen since early 2012.[1]

These promos are available since 2007. First with the Extreme Value Package, later with the Blister booster three packs. They are known as Store Foils, Store Promo Foils, Resale Foils or Resale Promos.[5] They also show up in other repacked products.

Package distributed by MJ Holding Company LLC, containing 6 random packs and a 2017 or 2018 promo for MSRP $19.98. Created for Chaos Draft.

Clear Acrylic storage cubes, packed by a third party ("Fairfield"[6]). The most recent ones contain two booster packs and one mystery deck for an MSRP of $19.99.[7][note 3] You can see the front of the booster packs through the plastic storage cube, but the deck is hidden. This may be an Intro pack, or a potentially valuable old Commander, Archenemy or Duel Deck.[8] Notice that Commander decks are thicker and heavier than Intro Packs. They also may be recognized by a red band around the deck.[1][note 4]

In the past, these storage cubes have also contained other products like 6-card booster packs from "gravity feeds", packs of 50 sleeves, packs of lands containing either 50-80 assorted lands,[note 5] or packs of semi-randomized cards from a Deck Builder's Toolkit.[note 6][1] They have also been known to contain damaged products.[1]

A 2012 variant contained one certain Commander deck, two random other decks, 3 regular boosters, and 2 6-card "bonus boosters" for an MSRP of $30.[1] There were also packages with four decks.[6]

A product distributed by MJ Holding Company LLC, available for MSRP $24.98. Each box contained six booster packs, including one mystery pack selected from among some of the most beloved sets in modern Magic: The Gathering history.

The fixed boosters were Battle for Zendikar, Oath of the Gatewatch, Shadows over Innistrad, Eldritch Moon and Kaladesh. The mystery ranged from Shadowmoor to Khans of Tarkir. A spindown life counter is also included.

The fixed boosters of wave 2 were: Oath of the Gatewatch, Shadows over Innistrad, Eldritch Moon, Kaladesh and Aether Revolt.

The 2019 version contained only five boosters for the same price. The fixed boosters were: Ravnica Allegiance, Guilds of Ravnica, Core Set 2019 , and Dominaria.[11]

A product distributed by MJ Holding Company LLC, available in 2019 for MSRP $19.98. It contains three booster packs, a a spindown life counter, two promos (most often Thalia's Lancers, Curator of Mysteries and/or Bristling Hydra), and a 'bonus item' (usually a welcome deck or a land pack). One in four of the cubes is said to be seeded with a mystery pack (a booster from an non-standard older set).[12]

An official Wizards of the Coast product distributed by MJ Holding Company LLC, available since 2017.[13] Each box contains five booster packs, including one mystery pack selected from among some of the most beloved sets in modern Magic: The Gathering history. The fixed boosters are Kaladesh, Amonkhet, Hour of Devastation and Ixalan.