This page is about the card type. For the MTGO format, see Vanguard (format).

Vanguard is a supplement and a card type for Magic: The Gathering that debuted in Arena's Summer Season of 1997 and are used in the format of the same name.

The oversized (3" × 5") Vanguard cards aren't played like regular cards. Instead, each player chooses one of the character cards before the match begins and plays under the conditions set by that card.[1][2]

The result of a cooperative effort between Wizards of the Coast's R&D and Events departments, Vanguard was designed specifically for casual play. The cards were released in four 8-card sets, the first two were designed together. Series 1 could also be obtained in the Vanguard Gift Box. The intent was to use the Arena League as a test market for the concept of supplemental products.[3] As it turned out, Vanguard was a huge success. Nearly 5,000 joined Arena during the first season, the biggest increase in league history, yet. From there, the decision to release the second group of eight cards in early 1998 (Winter Season) was simple. The third set appeared in late 1998 (Autumn Season), and the fourth in the Spring Season of 1999.[4][5][6] 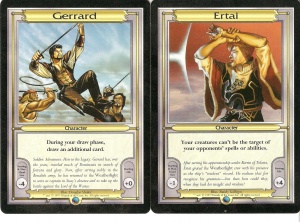 Four cards were bagged together with The Duelist magazine:

Since May 2005, Vanguard avatars have also been used in casual games for Magic Online. You would add one of them to your deck before playing, and at the start of the game, the avatar card from your deck would start in play for you and applied the modifications listed on it.[8] Starting with Zendikar, rules text and starting hand size/life total modifiers for Vanguard avatars have been discontinued. Nowadays, you may continue to play the vanguard format with previously released avatars. Both old and new avatars can still be used to represent you in-game.[9]

The Mystery Booster set in 2019 was the first set to feature a new paper Vanguard as a test card: Ral's Vanguard.

Ral's Vanguard introduced the requirement keyword, which specifies restrictions on contents of the deck that plays with the Vanguard.

Vanguard
1. A casual variant in which each player plays the role of a famous character. See rule 902, “Vanguard.”
2. A card type seen only on nontraditional Magic cards in the Vanguard casual variant. A vanguard card is not a permanent. See rule 311, “Vanguards.”