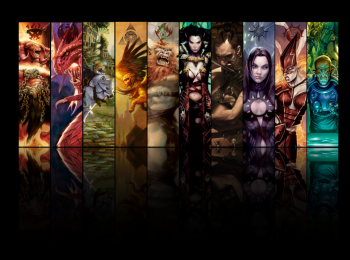 The Guilds of Ravnica are ten sociopolitical factions that hold power on the city plane of Ravnica. Each guild has its own distinct ideology that unifies its members with one another, with the guild itself, with its functions and purposes, and with its structure.

In the game of Magic: The Gathering, guilds are represented by two-colored pairings of Magic's five colors and have, to date, been predominantly featured in the Ravnica, Return to Ravnica and Guilds of Ravnica blocks.[1][2][3] 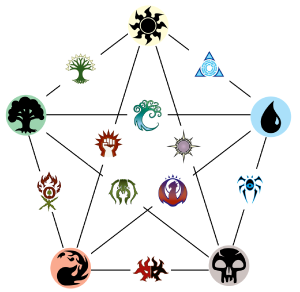 The guild crests and their place in the color pie

Each guild has a Parun, which is the founder of a guild and first guildmaster. Besides a guildmaster, each guild also features its own guildmages[5] and a champion.

Some characters from Ravnica, such as the unguilded Krenko[6] and Yeva of the Selesnya Conclave,[7] are not featured in any of the cards from those blocks, but still bear the indelible influence of the guilds of Ravnica.

Collectively, the guilds of Ravnica have ruled the plane for 10,000 years, since the signing of the ancient and magically potent Guildpact, a binding spell, document, and contract, that details the specific role and responsibilities of each of these guilds.

Prior to the events of the novel Dissension, guilds would try to find loopholes so as to increase their power without breaching it. Following Dissension, however, guilds are no longer bound by the document; and, although the guilds themselves did not completely collapse, their influence on the city and plane of Ravnica diminished, as demonstrated in the Return to Ravnica block storyline arc.[8]

Gradually, the general populace's distrust of the guilds diminished and, once again, the guilds returned and became ascendant.[9][10][11] Old guild and factional loyalties rekindled, and new guildmasters assumed the mantle of a majority of the guilds;[8] only the Izzet League, Orzhov Syndicate, and the Cult of the Rakdos retained their original guildmasters.

In the events of the Return to Ravnica block, planeswalker Jace Beleren collaborated with Niv-Mizzet of the Izzet League,[8] while planeswalker Gideon Jura was in alliance with Aurelia, commanding Boros Legion soldiers.[12]

The older crests from the Ravnica block 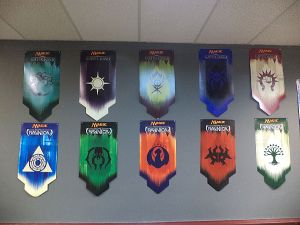 Guild flags from the Return to Ravnica block