Ramirez DePietro was a flamboyant pirate from Dominaria, who pillaged the seas surrounding Jamuraa around 3000 AR. He had a past with Adira Strongheart which was left purposely vague. Ramirez and Tor Wauki later fought against the Robaran Mercenaries before being pitifully defeated.

Ramirez DePietro's likeness also appeared nearly a thousand years later when his form was assumed by the shapeshifter Halfdane. Halfdane claimed to have killed the original DePietro, but this is widely regarded as a fluke of continuity, as DePietro would have died almost a thousand years previous to the events in question. 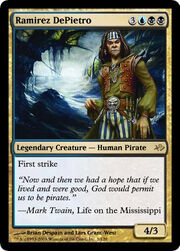