From MTG Wiki
(Redirected from Rabiah the Infinite)
Jump to: navigation, search 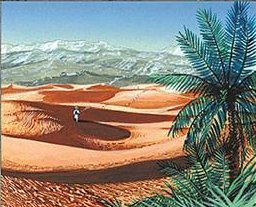 An oasis in Rabiah. Art by Brian Snõddy

Rabiah is a collection of one thousand and one originally identical planes, all refracted off of the original Rabiah during the Thousandfold Refraction.[1] It is for this reason that Rabiah is known as "the Infinite". Over the centuries, these planes have since developed independently of each other. However, there are some general features that are consistent across almost all variations of Rabiah.

Rabiah is a desert world. Where Rabiah's plane touches another, the severe environment often begins to "infect" its neighbor. However, that rarely worries Rabiah's inhabitants, since they are hardy desert dwellers. Planar links in Rabiah often appear in the form of giant desert twisters. Such dust storms violently propel any who venture too near them into the particular plane the gates link to. One plane often linked to Rabiah is Wildfire; another one is Dominaria, in particular the continent of Jamuraa.

Although most Rabian cultures are patriarchal and Arabic in feel, the vast range of Rabiahs also includes matriarchy. Furthermore, one plane, known as Dark Rabiah, has been taken over by sinister forces and is as evil a place as even Phyrexia.[2]

Rabiah was the setting for the Arabian Nights expansion, and was based upon the One Thousand and One Nights collection of stories.

A variety of characters are connected to the multitude of planes which compose Rabiah:

Mark Rosewater stated that Rabiah will likely never be revisited in a Standard-legal set, due to the fact that it is not Wizard's own intellectual property.[3] Continued prompting on this subject led him to create the Rabiah Scale, as a planar equivalent of the Storm Scale, on which Rabiah holds the highest (least likely) rank by definition.[4][5]