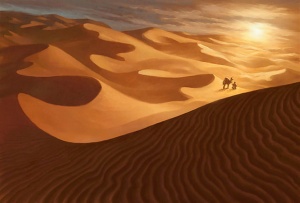 Rabiah will likely never be revisited.

The Rabiah Scale is a ranking of the likelihood that a given plane will be revisited as the setting of a future Standard-legal set. Planes are ranked from 1 (very likely) to 10 (very unlikely).

The Rabiah Scale is analogous to the Storm Scale for mechanics. The Storm Scale is named for the storm mechanic, which has proven so developmentally problematic that it will almost certainly never be reprinted in a Standard-legal set. In the same way, the Rabiah Scale is named for the plane of Rabiah, which will almost certainly never be revisited because it is not Wizards of the Coast's intellectual property.[1][2]

Though it is published by Mark Rosewater, it is only a reflection of his opinion and generalities about the plane. It does not account for any actual future plans, or the opinions of other R&D members.[3]

As described in Storm Scale the following rankings apply: