Prerelease tournaments (or prereleases) are events held one week before the release of an expansion set.[1] Starting with Shards of Alara, Wizards of the Coast allowed local stores to run the tournaments, which vastly broadened their attendance.

Prerelease cards have been given out at Prereleases since Tempest.

Starting with Commander,[2] certain sets featured achievement cards which were created after the successful introduction of achievements in Duels of the Planeswalkers. The achievement card sets certain tasks that are to be completed during the tournament. Examples of tasks are to play a certain card, to have a certain combination of cards on the battlefield or to make use of a newly introduced mechanic. After the player has played all of their matches, they show their completed score card (on the back of the achievement card) to the tournament organizer to receive additional prizes. Sets with achievement cards include: Avacyn Restored,[3] Return to Ravnica,[4] Gatecrash, Magic 2014 and Core Set 2020.

Prerelease packs are special packages that are sold for prerelease events, giving players a sneak peek at a new set. Nowadays, they usually contain a themed insert, a spindown life counter, and a premium promo card of any rare or mythic rare in the set. Early on, these were specially composed and packaged boosters. Later, they became themed deck boxes as a present for the participants.[5]

Approved Prerelease locations can purchase Prerelease packs from authorized distributors and, in North America, from Wizards of the Coast. Each store receives a specific allocation of Prerelease packs.

Starting with Mirrodin Besieged prereleases sometimes featured fun-enhancing gimmicks or 'experiences'. These are created by experience designers like Dave Guskin and Gavin Verhey.[6] Because they weren't popular enough, the 'experiences' were discontinued after Magic Origins.[7]

Mirrodin Besieged had faction packs and urged players to "Pick a Side". Cards with the Mirran watermarks appeared only in Mirran boosters, and cards with Phyrexian watermarks appeared only in Phyrexian boosters. There was also one basic land in each booster. Foil cards would show up at about the same frequency as they did in regular boosters and didn't follow the rules about what booster they could show up in (both Mirran and Phyrexian foils could show up in either booster).[8] 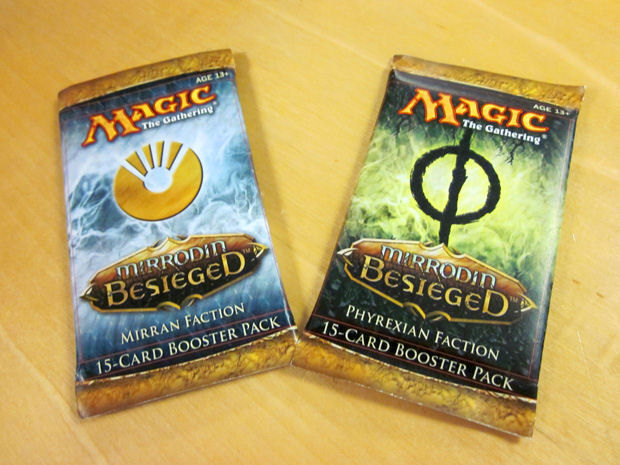 At each Dark Ascension Prerelease, some number of people were designated as a vampire, werewolf, zombie, or spirit at the start of the event. Any time a monster defeated a human in a Prerelease match, the monster (designated by some flashy stickers) would convert the human to their cause. At the end of each Prerelease, the remaining humans and the largest tribe or tribes of monsters would be declared winners, but the rewards were up to the organizers.[9]

For the Avacyn Restored Prerelease, stores were able to register for a limited number of Helvault Prerelease Kits along with the standard kits that come with every prerelease. When players at the special Helvault Events got achievements, they could each physically break a seal on their store's own (cardboard) Helvault. Once all the seals were broken, the store would open their Helvault and all the players would share the spoils within.[10][11] These were 54 oversized cards of Avacyn, Angel of Hope, Griselbrand, Sigarda, Host of Herons, Bruna, Light of Alabaster, and Gisela, Blade of Goldnight, 108 double-faced tokens (Angel/Demon) tokens and 54 20-sided spindown life counters. A select few premium helvaults contained foil oversized cards and 54 promo foils thematically tied to angels or demons (some of which were old Judge Gift cards).[12] 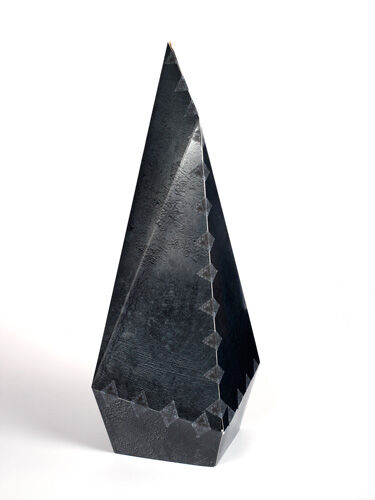 For the Return to Ravnica Prerelease, you could choose from five Guild Prerelease Packs. The options were Azorius, Izzet, Rakdos, Golgari, and Selesnya. Each Guild Prerelease Pack contained five Return to Ravnica booster packs, a guild-specific booster pack, a special alternate-art prerelease card unique to each guild, an achievement card, a Spindown life counter, a guild symbol sticker, and a letter from the guild's leader.[13][14]

Gatecrash had the same package as Return to Ravnica, but for the Orzhov, Dimir, Gruul, Boros, and Simic guilds.[15][16]

Dragon's Maze Guild Prerelease Packs each contained a Guild booster from Return to Ravnica and one from Gatecrash. 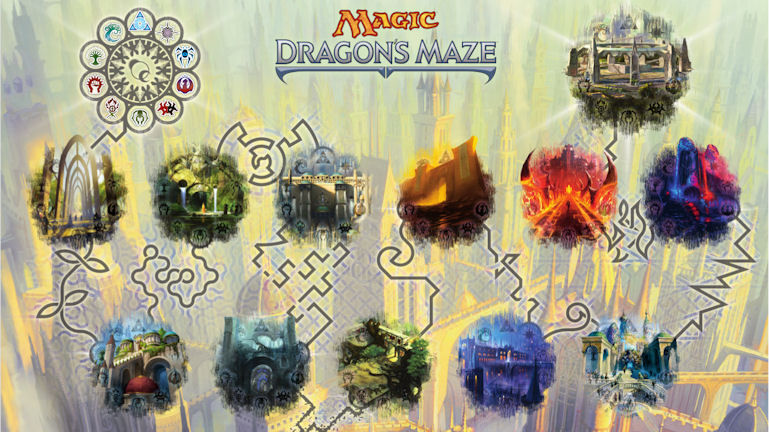 A cardboard version of the Implicit Maze was used as a gimmick to mark players' progress in the tournament. Players could work collectively to advance their chosen guild through the Implicit Maze each round. There were prizes for each guild that got all the way through the maze and special prizes for the first guild that did it. And when the maze was completed, all participating players would receive a premium (foil) basic land promo card.[17]

Theros featured the first quest of the Hero's Path: Choose a Path.[18] The Hero Prerelease Pack contains a spindown life counter, a Hero card unique to a players' chosen path, one of five quiz activity cards, five Theros boosters, a special seeded booster featuring cards appropriate for that player's chosen path and one of the five playable Prerelease promo cards. While building decks and playing matches players can work together to find the answers to the questions about Theros on their activity cards. This social scavenger hunt offers players an opportunity to engross themselves in the lore of the new block and interact with their fellow heroes. Once a player has filled out the card, they can check the answer key to see if they completed it correctly. Once completed, they are finished with Quest #1 and ready to continue on the Hero's Path.

Born of the Gods featured the fourth quest of the "Hero's Path": Master your Destiny. The Hero Prerelease Pack contained a spindown life counter, a Hero Card unique to a players' mastered destiny, one of five quiz activity cards, three Born of the Gods boosters and two Theros boosters, a special seeded booster featuring cards appropriate for that player's mastered destiny, one of the five playable Prerelease promo cards and a Hero's Path welcome letter.

Journey into Nyx featured the seventh quest of the "Hero's Path": Forge a Godslayer. The Hero Prerelease Pack contained a spindown life counter, a Hero Equipment Card unique to a players' forged Godslayer, one of five quiz activity cards, two Journey into Nyx boosters, one Born of the Gods booster and two Theros boosters, a special seeded booster featuring cards appropriate for that player's chosen Godslayer, one of the five playable Prerelease promo cards and a Hero's Path welcome letter. During the prerelease, players had the opportunity to win three mystical components, represented by reward stickers. Three-component stickers combined in specific ways to create one of seven different enhancements. The activity card was handed into the tournament organizer to receive the corresponding "enhancement sticker". That sticker was put on the player's Hero Equipment Card in the blank space as a new permanent ability. This resulted in a customized Godslayer. 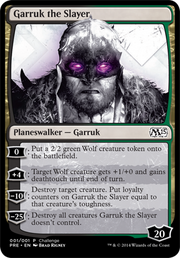 Every Magic 2015 prerelease pack came with a oversized challenge card, Garruk the Slayer, which was a key component of Magic 2015's experience design (designed by Ethan Fleischer and Gavin Verhey). The prerelease pack further contained five regular booster packs, a seeded booster pack, a premium promo card, an activity insert, a Spindown life counter, and three Wolf tokens. One player played their Prerelease deck as normal. This player always went first. The other player acted and played as Garruk. Garruk started at 20 loyalty and could activate one loyalty ability each turn. Garruk could be attacked and if his loyalty reached 0, he lost. But if Garruk's horde of Wolves dropped the player to 0, then Garruk won. The oversized Garruk Planeswalker card couldn't be returned to its owner's hand or otherwise removed.[19]

The Khans of Tarkir prerelease endorsed the player to affiliate with their clan.[20] Each clan prerelease pack came with a clan button and a clan sticker. The prerelease pack further contained five regular booster packs, a seeded booster pack, a premium promo card, a clan information card, an activity insert, and a Spindown life counter. There were forty possible prerelease cards. One dated and stamped prerelease card random from a pool of eight for each Clan pack. One of which was the Khan. "Raise Your Banner": when a game was won, players could put their sticker on the clan banner in the store, to show off how many battles each clan had won.

At the Fate Reforged prerelease, players again choose their clan.[21] While they completed three achievements, they followed in Sarkhan's footsteps to attempt to alter fate; they got to "Heal Ugin" and "Gain a glimpse of the future". The latter came in the form of a special "Ugin's Fate" booster pack containing two alternate art cards that show how the world has changed in the new timeline, a token and a basic land card. There's a pool of 40 alternate art cards with a holofoil stamp, the main change in the art being that there are dragons now.

For the Dragons of Tarkir prerelease, each participating store received a Tarkir Dragonfury playing board with character pieces that stand upright on them.[22] The board is a Tarkir landscape, and the pieces can be knocked down by a throw with a special spindown life counter, themed to the breath weapon of one of the five Tarkir dragonlords. Each piece has a point value on it, and the player gets points equal to the total number they knock down. If the die ends up in the central circle, the score is doubled. Every player gets two rolls (resetting the board between each roll). Depending on the highest score, up to four alternate art promotional cards could be won: a land, a common, an uncommon, and a rare dragon.

Players were encouraged to complete the "Five Trials of the Gods". Players who attended Prerelease received a Trials Activity Card in their Prerelease pack. They were rewarded four-sided "lazotep" counters for each trial they completed. The counters could be used to keep track of -1/-1 counter on their cards.[25]

Guilds of Ravnica and Ravnica Allegiance[edit]

For the Guilds of Ravnica and Ravnica Allegiance Prerelease, you could choose from five Guild Prerelease Packs, containing five regular Guilds of Ravnica booster packs and one seeded booster composed entirely of cards relevant to that player's choice of guild. It also contained a randomized, date-stamped foil promo card, drawn from any rare or mythic in the set.