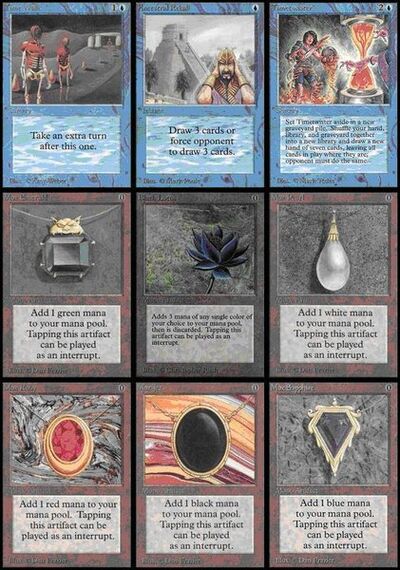 In Magic: The Gathering, the Power Nine are nine rare cards found in the Alpha, Beta, and Unlimited sets, and are widely considered to be the most powerful cards ever printed. In games where they are legal, they play an important role in the competitive tournament atmosphere. However, they are only legal in Vintage in which they are restricted, meaning a deck may not contain more than one copy of the cards. Due to their power, these nine cards are considered "broken" (overwhelmingly powerful).

The Power Nine are:

The Black Lotus is the most valuable Magic card ever to be released in a regular set. Especially its Alpha and Beta versions are considered to be extremely valuable.[1] Former Pro player and Magic writer Zvi Mowshowitz has declared Black Lotus as the best artifact of all time, claiming every deck in the history of the game is better with a Black Lotus in it.[2] The illustration on Black Lotus was painted by Christopher Rush, who was at the time a Wizards of the Coast employee. The Black Lotus illustration is a depiction of a black lotus flower over a foliage backdrop.

The cycle of five Mox cards — Mox Pearl, Mox Ruby, Mox Sapphire, Mox Jet and Mox Emerald — are Artifacts, that are similar to the five Basic lands in that they add one mana of a specific color. In most situations the Mox cards are better than lands because a player can play as many of these as they desire while a player can only play one Basic land per turn.[2] All five Mox cards have been illustrated by Dan Frazier. In each artwork a different piece of jewelry is depicted.

Ancestral Recall allows the player to use one card to draw three more at an extremely low mana cost.[3] It originated as part of the "boon" cycle, one of each color, which gave three of something (e.g. mana, life, damage) for the cost of one mana. Ancestral Recall remains the only one of these cards to not have been reprinted since Unlimited.

Timetwister holds great power due to its ability to get a hand of fresh cards with the possibility of drawing cards that used to be in that player's graveyard.[3]

The "Power Nine" in a modern frame

The fame of the cards has been alluded to in subsequent printings of Magic: the Gathering.

The first attempt to design a fixed Black Lotus was Lion's Eye Diamond from the Mirage edition. Lion's Eye Diamond was designed to be unplayable due to requiring the player to discard their hand, but still ended up being very powerful.[2] The card was eventually restricted in Vintage. Lotus Vale, from Weatherlight, was a land that permitted repeated use of the Black Lotus's ability, but required that two lands be sacrificed when played. The Tempest card called Lotus Petal is identical to Black Lotus except that it only produces one mana instead of three, and also ended up restricted in Vintage. Urza's Saga saw the release of Lotus Blossom, which costs   and enables its controller to put a petal counter (possibly in reference to Lotus Petal) on it at the beginning of their upkeep, then tap and sacrifice it to add an amount of mana of any one color equal to the number of petal counters that were on the card. From Mirrodin, Gilded Lotus imitates Black Lotus's ability by producing the same amount of mana without being sacrificed, but at the much higher cost of   to play. Lotus Bloom, printed in the expansion set Time Spiral, has Black Lotus's ability but incorporates a three turn delay. Core Set 2020 introduced Lotus Field, a land similar to Lotus Vale in that it also requires sacrificing two lands when played, but as an "enters the battlefield" triggered ability rather than a replacement effect, and therefore could be circumvented with an ability counterspell such as Stifleor Repudiate. Lotus Field enters the battlefield tapped, and uniquely for a land, has hexproof.

Mirrodin features a Chrome Mox while Stronghold is the home of Mox Diamond, both of which ended up being fairly powerful but still balanced.[2] Mox Opal from the Scars of Mirrodin expansion enables its controller to add one mana of any color via the Metalcraft keyword ability. Mirage had five Mox-like cards called "Diamonds", one for each color. Diamonds were identical to Moxes, except that they cost   to play, and they enter the battlefield tapped. Mox Amber appeared in Dominaria; it can tap for one mana of any color of a legendary creature or planeswalker you control. Modern Horizons gave us Mox Tantalite, an artifact with " : Add one mana of any color." and no mana cost, instead having a suspend 3 ability with a cost of  .

In Ice Age appeared Brainstorm. Though the caster of Brainstorm has to put two cards back on top of his or her library after drawing three, Brainstorm is still considered a powerful card, and has been restricted in vintage. In Time Spiral Ancestral Vision but with a four-turn delay, similar to the delay that was used to balance Lotus Bloom. In Magic 2012, Visions of Beyond functions as a cantrip, but can act as an Ancestral Recall if any player's graveyard has 20 or more cards in it. In Worldwake, a planeswalker named Jace, the Mind Sculptor was printed. His [0] ability is basically a Brainstorm for free. The Alliances card Library of Lat-Nam allows the caster's opponent to choose between the caster drawing three cards at the beginning of the next turn's upkeep (a la Ancestral Recall), or the caster searching his/her library for one card, and putting that card into their hand (a la Demonic Tutor). In Khans of Tarkir, the card Treasure Cruise gives three cards at a much higher mana cost, but can be reduced to Ancestral Recall's cost using Delve; this led to it rapidly being banned in Modern.

Time Walk has several descendants. Final Fortune from Mirage is a red Time Walk costing   , but with the additional price of losing the game at the end of the extra turn. Guilds of Ravnica's Chance for Glory is very similar to Fortune, costing     instead and additionally granting indestructible to your creatures. Time Warp from Tempest is identical to Time Walk, except the casting cost is     instead of   . Time Stretch from Odyssey is essentially a double Time Warp, costing     and giving you two extra turns instead of one. Beacon of Tomorrows from Fifth Dawn gets the caster an extra turn with the additional benefit of getting shuffled back into the library, but costs    . Later, Walk the Aeons of the Time Spiral expansion was released. It allows a player to take an extra turn for the cost of    , but can be bought back by sacrificing three islands. Then there comes Savor the Moment; its casting cost of     is only one more than Time Walk, but you have to skip your next untap step, severely curtailing its usefulness. Next, Temporal Mastery, which costs    , but with the miracle ability to enable casting it with merely    when the player draws it as the first card drawn in a turn. Rivals of Ixalan added Timestream Navigator, who only cost   , but required    , the card being tappable, and the city's blessing to activate the extra turn. Core Set 2019 added Nexus of Fate, an extra turn spell at the cost of     that is shuffled into it's owner's library instead of being put into a graveyard, including as it resolves.

The reprinting of Time Warp in Magic 2010 caused many decks to be built around it and Time Sieve, an artifact that allows for a Time Walk effect by sacrificing 5 artifacts in play. In addition, Nexus of Fate caused a significant impact on standard when paired with cards such as Wilderness Reclamation.

The Urza's Saga card Time Spiral untaps enough lands to pay for itself (although its converted mana cost of 6 keeps it unplayable in the early turns) and exiles itself from the game.

Diminishing Returns has a similar effect to Timetwister for just one blue mana more, but as an additional cost forces the caster to remove 10 cards of his or her library from the game. The Betrayers of Kamigawa card Sway of the Stars adds the effect of setting of each player's life total to 7, but costs 10 mana. Mirrodin's version, Temporal Cascade can duplicate Timetwister via the Entwine mechanic, but costs 9 mana if used this way. In the 2011 core set, a fixed version of Timetwister has appeared called Time Reversal which does the same thing, at 5 mana. Magic Origins also featured Day's Undoing, which is identical to Timetwister except that it ends the turn (allowing the caster's opponent to use the seven new cards first).

Parodies of the Power NineEdit

Not only has the fame of the Power Nine been alluded to years after their release, but it has been lampooned in ways that hyperbolize their utility.

The Unglued parody set contained Blacker Lotus, a card with art that depicts the original Black Lotus being overshadowed in prominence by a much larger, more powerful lotus. For the same casting cost of   as Black Lotus, Blacker Lotus can enter the battlefield and produce 4 mana of any one color as opposed to 3 in the case of its predecessor. However, the improved utility comes with a much greater price, as instead of merely sacrificing Blacker Lotus to harness its activated ability as is the case with Black Lotus, Blacker Lotus' activated ability requires its controller to literally "Tear Blacker Lotus into pieces." Unglued also contained Jack-in-the-Mox, a card that costs   like the original five moxes and which depicts in its artwork a Jack-in-the-box whose crown is ornamented with the original five moxes. Based on the outcome of a six-sided dice roll as per its activated ability, six different results of using the card's activated ability are possible, with rolling a "1" causing the card to be sacrificed and its controller to lose five life, and the other results causing additions of one colored mana of one color of Jack-in-the-Mox's controller, with a "2" resulting in the addition of  , "3" adding  , "4" adding  , "5" adding  , and "6" adding  .

The Unhinged parody set that followed Unglued contained Mox Lotus, a card that was a combined parody of the power of the various lotus and mox cards, especially Black Lotus and the five original moxes, as precious sources of mana that could enable their controller to gain significant card advantage and/or tempo. Like its legal mox predecessors, the artwork for Mox Lotus depicts the artifact as a piece of jewelry, and like its legal lotus predecessors, it is shaped in the form of a lotus. For the hefty converted mana cost of  , Mox Lotus is the first card to have been printed that, by itself, enables its controller to generate infinite mana of not just one color, but infinite mana of every color, as well as infinite colorless mana, in the same turn. Notably, as Mox Lotus was printed in 2004, the card says "You do not lose life due to mana burn," which is a point of historical interest as the card was printed before mana burn was eliminated as a functioning game concept and made obsolete.

The term "Power Nine" was originally coined based on the cards in the group representing a substantial jump in price over any other card in the game. However, with slowly dwindling supply (due to loss and accidental destruction), no reasonable expectations of reprints, and an increasing demand, the market has changed, putting three more cards on nearly the same price plateau as the Power Nine: Bazaar of Baghdad, Mishra's Workshop, and Library of Alexandria, the last of which, from the Arabian Nights, was historically often referred to as the tenth piece of power.[5] All are worth at least $1000 USD on the secondary market. It has also been argued that the cards Yawgmoth's Will, Tinker and Sol Ring all rival or exceed the power level of the Power Nine, but because of their much lower rarity, they do not fetch nearly the same price.