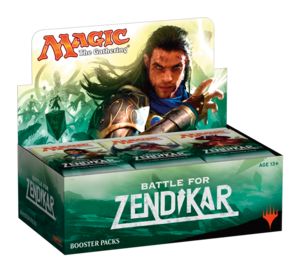 A Magic: The Gathering booster box. For most sets, a box contains 36 booster packs.

Magic: The Gathering has been distributed in several products throughout its history. In a typical year, one core set and three expansions are printed, containing the majority of the new cards. Each of those sets is sold in booster packs, bundles, and Planeswalker decks. Additionally, each year sees a summer supplemental set and a new Commander release.

Wizards of the Coast also publishes digital versions of new sets within current video games. Magic Arena and Magic Online are digital version of the trading card game, available on Windows. Both allows for online, DCI-sanctioned tournaments, and some reprint sets are exclusively available within them. Arena is the newer program and has a stronger focus on Standard while Online is older and covers the Modern area of play.

Aside from Magic itself, Wizards also sells a board game, Arena of the Planeswalkers, which shares a common theme with the card game. They sell game-related clothing and other assorted merchandise from their website.

Other companies offer a variety of licensed merchandise, such as playmats, card sleeves, and deck boxes. In the past, Wizards has partnered with outside publishers to produce books and comics to convey the game's story, though the story is now told through a column on the official website.