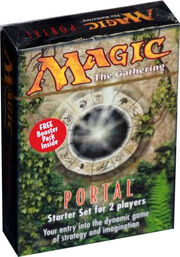 The Portal 2-Player Starter Set was a Magic starter-level box set released in 1997, as part of the Portal product range.

This 2-Player Starter Set was part of Wizards of the Coast's first major attempt at a set catering to prospective and newer players. It was designed to provide them a format with simpler rules than a core set or an expansion set. It was released in several languages. A Gift Box edition featured additional content.

The Gift Box is actually a bigger box that packages the regular box product with additional content.

Seven of the cards from these boxed sets were printed with either flavor or reminder text different than their booster pack counterparts. Those cards are: Anaconda, Blaze, Elite Cat Warrior, Hand of Death, Monstrous Growth, Raging Goblin, and Warrior's Charge.