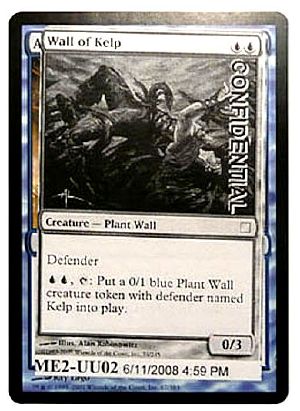 A playtest is the process by which individual cards, as in card design, or sets of cards, as in decks, are played to test the card or cards for design issues to establish a desired quality.[1][2]

Playtest cards often have specific card codes, to make them recognisable for the playtesters.[3][4][5] They are highly confidential. In early 2006, Wizards of the Coast filed a lawsuit against Daron Rutter, a moderator from MTG Salvation, for posting playtest cards for upcoming Magic: The Gathering card sets.[6] The lawsuit accused him of engaging in copyright infringement, contributory copyright infringement, trade secret violation, unjust enrichment, and breach of contract.[7] The case was settled out of court, and the terms of the settlement have been sealed.[8]

As a gimmick for Mystery Booster, pretend playtest cards were added to the boosters.

Deck playtesting involves testing a given deck against popular decks in a format's metagame and accordingly modifying the decklist, its main deck and its sideboard, to better deal with those decks.[9]