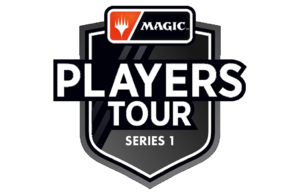 Players Tour Series 1 was the first Premier Event level to feature the Pioneer format since its inception in October 2019. It also featured Theros Beyond Death Draft.

384 players entered the fray in Brussels. At the end of eight rounds, the original field of 384 was whittled down to 130. Leading the charge into Day 2 were two players at 9-0: Bernardo Torres from Portugal and Juan José Rodríguez López from Spain.[3] After the Top 8 was decided on Day 2, Joel Larsson won Players Tour Brussels today with his homebrewed Sultai Delirium deck, defeating Magic Pro League member Piotr Glogowski on UB Inverter of Truth 2–1 in the finals.[4][5]

Unlike the Brussels and Phoenix PT's, Nagoya only ran for two days. The format was the same, however, featuring competitive tabletop play in THB Booster Draft and Pioneer.[6] Out of the 192 players, 19% registered UB Inverter of Truth, compared to 12% of the field at Players Tour Brussels. Only one player went undefeated on day 1: Yuuta Takahashi. Kenta Harane won Players Tour Nagoya on Sunday evening with Bant Spirits, defeating Magic Pro League member Ken Yukuhiro on Sram Auras 2–1 in the finals.[7][8]

The power of the Lotus Field-Underworld Breach-Hidden Strings combo deck was unleashed after Brussels, with effectively any deck that could not outrace the Inverter-Oracle or Breach combos falling far on the wayside, such as the Heliod-Ballista decks and the mono-Green Ramp decks.[9][10][11][12] In a surprising repeat of the previous two events, a well-known GP ringer, Corey Burkhart, defeated a MPL member (William Jensen) in the finals.[13]

Participants were to be:

The COVID-19 outbreak in January resulted in preventative measures taken in March, which included the cancellation of Players Tour Finals Houston.[14] All invites were shifted to the next relevant event.