A "player type" refers to the player profiles that Wizards of the Coast has detected. There are two classifications:

Expansions are designed with cards that appeal to players of all profiles, and Wizards of the Coast categorizes its Magic consumers into three psychographic profiles: Johnny, Timmy, and Spike.[1]

In March 2015, Rosewater decided to create female versions to list along with the male versions to convey that these psychographic profiles apply to everyone.[4] Thus, Jenny and Tammy came into use. Rosewater considered Spike to be a nickname that was gender neutral. 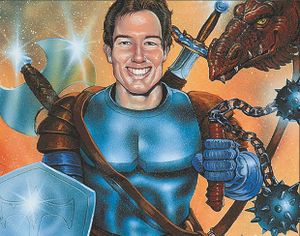 A Timmy or Tammy is characterized by their tendency to use big creatures and cast big spells. Large, exciting plays motivate them. Timmies are most associated with playing for fun, and all kinds of huge creatures, fantastic spells, and mythical enchantments. They are the most social archetype, enjoying the interaction that Magic provides. A stereotypical Timmy/Tammy is usually a younger player with a simple (yet fun for them) deck. They do not care whether they win or lose, but want to have fun playing really big effects.[5][6][7]

The 'Timmy/Tammy' profile was represented in the Unglued card Timmy, Power Gamer.

Some subgroups of Timmies are:[1]

Timmies see Johnnies as too focused on certain combos and Spikes too bent on winning. 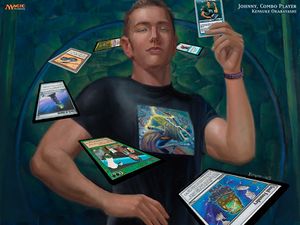 A Johnny or Jenny is characterized by their tendency to build complex and creative decks. Johnny/Jenny is most commonly known as a 'combo player', and they sometimes choose for elaborate but inefficient win conditions. They like to find interesting combinations of cards that can win the game or give them an advantage. Johnny may be a player who seeks niche cards, or cards widely reputed as bad, and tries to "break" them, exploiting them in ways to give abnormal power and win the game. Johnnies are happiest when their decks work and they win their way; for them, one in many leaves them happy, if that win is on their own terms.[10][11]

The 'Johnny/Jenny' profile was represented in the Unhinged card Johnny, Combo Player.

Some subgroups of Johnnies are:[1]

Johnnies see Timmies as simplistic and Spikes as uptight and unoriginal.

For the creature type, see Spike. 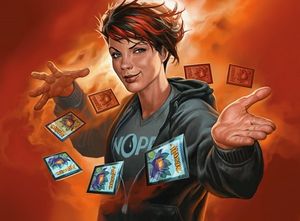 A Spike is characterized by their competitive nature and they play primarily to prove how good they are. Spike will find the best deck in the format, even if it requires copying another innovator's work (see netdecking). Spike's cards are effective, designed to secure a fast and effective victory over opponents. If Spike plays several games and loses only one, but feels they should have won it, they may be malcontent.[12][13]

The 'Spike' profile was represented in the Unstable card Spike, Tournament Grinder.[14]

Some subgroups of Spikes are:[1]

Spikes see Timmies as rookies and Johnnies as eccentric and annoying.

Wizards of the Coast categorizes its Magic consumers into two aesthetic profiles: Melvin and Vorthos.[15]

Mel is the "mechanic player", someone focused on the craft of Design & Development. A Mel is characterized for appreciating cards with delicate and interesting interactions, as well as strong mechanics. A Mel appreciates that there are many different elements that have to come together to make a Magic card function structurally, from the color pie to the mana system to the rules to the templating to the mechanical needs of the set.[3][16]

Examples of cards that a Mel might like include Firemaw Kavu and Stuffy Doll from the Time Spiral expansion and Hangarback Walker from Magic Origins.

An imagining by the Magic Creative Team depicting Vorthos.

Vorthos is the "flavor player", someone focused on the craft of Creative. A Vorthos is characterized by appreciating cards with flavor and creative consistency. The name, the illustration, the card concept, the subtype (if the card has one), the flavor text—each of these helps paint a picture of what exactly the card is representing. A Vorthos evaluates cards based on these components both in isolation and in conjunction. Vorthos was first envisioned by Matt Cavotta.[17][18][19][20]

Examples of cards that a Vorthos might like include Rescue from the Underworld from Theros, Deicide from Journey into Nyx, Crux of Fate from Fate Reforged.

In 2015 Ant Tessitore wrote an article titled "Vorthos 2015" in which he provided an updated view of how one could consider themselves a Vorthos. In the article Ant divided Vorthoses into five categories based on what the individual appreciates about Magic: the Gathering: 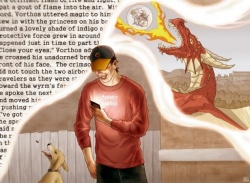 An unused conception image of Vorthos.

The Mystery Booster test card Metagamer introduced a new player type, that chooses their cards to counter decks that are popular in the metagame.