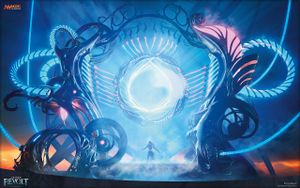 The Planar Bridge is an artificial planar portal, created by the inventor Rashmi on Kaladesh.[1][2]

Nature of the Bridge[edit | edit source]

When the Mending occured, all existing planar portals had stopped working.[3][4] The Planar Bridge is the only known example to replicate their function.[5] The Planar Bridge, however, can only transport non-organic or dead matter.[6] Planeswalkers are the one exception.

The Planar Portal was stolen by Tezzeret, by order of Nicol Bolas.[7][8][9] Tezzeret took it off the plane, and incorporated it in his body.[10]

After putting together some of Bolas' machinations on Ixalan and Amonkhet, Jace and Vraska theorized that something on the plane of Ravnica was of extreme interest to Bolas. It seemed to be part of his plan to reclaim his lost power. In order to reach this goal, they reasoned that he planned to use the Planar Bridge to invade the plane with an interplanar army of immortals, while trapping the resident planeswalkers.[11]

Bolas's plan came to fruition, when Tezzeret opened up the Planar Bridge in the Chamber of the Guildpact on Ravnica, reducing it to rubble, [12][13] and the Dreadhorde invaded Ravnica.[14] It was revealed that planeswalkers could travel through the Planar Bridge without danger. Dack Fayden, Ob Nixilis, Karn, and Samut traveled to Amonkhet and shut it off. The portal inside Tezerret's chest exploded, which led to the larger portal that Eternals were actually walking through to implode and collapse upon itself. Tezzeret planeswalked away after his defeat. The scar of the planar portal was removed by the combined magic of the guildmasters of Ravnica, reviving Niv-Mizzet in the process.[15]

Tezzeret planeswalked to multiple worlds before arriving at his fortress, the Seekers' Sanctum in Esper on Alara.[16] The damaged Planar Bridge had begun leaking energy that slowly seared the surrounding flesh on his chest. The energy trail it left also allowed the Wanderer to track him as she assisted Ral Zarek in his hunt for Tezzeret. During their confrontation, Tezzeret used the Planar Bridge to redirect Ral’s lightning strikes which rendered his attacks useless.

After Tezzeret’s victory, he used the Planar Bridge to orchestrate the abandonment of his fortress. The Wanderer later revealed that she could no longer sense its technology and that Tezzeret had most likely intended to be followed.[16]