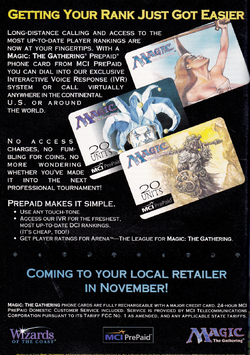 This series was produced in 1996 by MCI, after it was announced that MCI would become a sponsor of the Pro Tour. It is currently unconfirmed that the cards were produced, except by sightings at the following events. Other sources say the cards were not released until November. Attempts to order after February 1997 failed.

A prepaid card was given to DCI Legend members (joining before September 1, 1997) to promote the 1997 World Championships.[1]

In 2002, another series was produced featuring Krosan Beast, Sengir Vampire, and Shivan Dragon. Available mostly at premier stores, they came 30-, 60-, and 100-minute amounts.[2]