Paulo Vitor Damo da Rosa is a Brazilian professional Magic player and member of Tempo Storm. He was the 2016–17 Player of the Year, and with fourteen Pro Tour top eights to his name, including wins at PT San Juan 2010 and at PT Hour of Devastation, Damo da Rosa is one of the most successful Magic players of all time. He became World Champion in 2020.

Damo da Rosa started playing Magic in 1995, age eight, after reading an advertisement for the game in a magazine.[1] He started playing in tournaments very early on, and played Brazilian Nationals for the first time in 2000. At Grand Prix Rio de Janeiro in 2001, he went 5–2, but failed to make it to day two due to poor tiebreakers. At GP Curitiba the same year, he had earned three byes due to having a high DCI rating, and brought Battle of Wits. He didn't do well in the event, but was featured on coverage and gained some recognition.[2] He then joined some online leagues for play on Apprentice, and started making a name for himself in the online community.[1]

His first Pro Tour experience came in 2003, when he qualified for the World Championships in Berlin by virtue of being ranked among the top eight players in Latin America, though some suspected him for faking tournaments in order to boost his rating.[1] Playing Mirari's Wake in Standard and Goblins in Extended, he finished 55th in the event, good enough for a money finish. A year later, he once again found himself qualified on rating for the World Championships. He couldn't afford the flight to San Francisco, however, so he won one through a tournament where the prize was a flight to Worlds to spectate the event.[3] This time he finished 46th. At GP Porto Alegre 2004, his hometown Grand Prix, Damo da Rosa posted his first premier event top eight, finishing 6th.[4] He then qualified for Pro Tour London 2005, where he finished 55th. 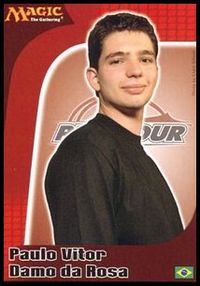 The 2006 season would prove to be Damo da Rosa's breakout year. He qualified for Pro Tour Honolulu via a PTQ; the PTQs starting to award plane tickets instead of $500 made the trip possible, and he went on to finish 20th in the event after losing the last round, where he played for top eight.[3] At the following PT in Prague, he started the event 10–2, but went 0–3 in the final draft to finish 30th. At Pro Tour Charleston, Damo da Rosa rose to fame by finishing runner-up alongside teammates Willy Edel and Celso Zampere, eventually losing in the finals to the Japanese team of Tomoharu Saito, Shōta Yasooka, and Tomohiro Kaji. Damo da Rosa now went to the last two Pro Tours of the season as one of the Player of the Year contenders. He won the 2006 Brazilian National championships, finished 42nd at PT Kobe, and at the 2006 World Championships, he dominated the first three days of competition, locking up a top eight berth three rounds before the end of the Swiss rounds. By reaching the final, he'd also become the Player of the Year,[5] but he lost in the quarterfinals to eventual champion Makihito Mihara in a famous five-game match. In the fifth game, Damo da Rosa mulliganed to five and looked like he was going to lose, but Mihara miscounted his mana when trying to go off with Dragonstorm; failing would almost certainly have left Damo da Rosa winning, but he cast Repeal on Damo da Rosa's Savannah Lions, which drew him into his third Rite of Flame, which gave him enough mana to cast Dragonstorm and win the match.[6] Damo da Rosa ended the season on 51 Pro Points, enough for Level 6 - the highest - in the Pro Players Club.

Over the next years, Damo da Rosa established himself as one of the top players in the game. At Pro Tour Geneva, he finished in the money again, achieving a record of nine money finishes in nine total Pro Tours played, though the streak ended at the next Pro Tour, PT Yokohama. He didn't top eight a Pro Tour in 2007, but in 2008, he posted his third and fourth, at PT Hollywood and at the 2008 World Championships, respectively; on both occasions he lost in the quarterfinals. In 2009, he won the Brazilian National championships again, and his fifth Pro Tour top eight came at PT Austin 2009, but he once again lost in the quarterfinals, playing Dark Depths combo in Extended.[7]

In 2010, for PT San Diego, Damo da Rosa joined Team ChannelFireball alongside players such as Luis Scott-Vargas, David Ochoa, and Josh Utter-Leyton.[8] At the very next Pro Tour, PT San Juan, Damo da Rosa, in his sixth top eight, not only escaped the quarterfinals for the first time in an individual event; he went all the way and took the title, defeating Guillaume Matignon 3–2 in the finals.[9] He came close to the Player of the Year title again when he later in the same season top eighted the 2010 World Championships in Chiba, but Guillaume Matignon got his revenge from San Juan by defeating Damo da Rosa in the semifinals.[10] Had Damo da Rosa won the match, he would have been the Player of the Year. In 2011, Damo da Rosa won his first Grand Prix event, at GP Singapore, playing the infamous Caw-blade deck. He also once again made it to the top eight at the World Championships, but was eliminated in the quarterfinals. At the very next event, he placed runner-up at Pro Tour Dark Ascension behind Brian Kibler. His results qualified him for the 2012 Players Championship (later renamed the World Championship), an exclusive high-stakes 16-player tournament; he there finished third. At Pro Tour Return to Ravnica, he was inducted into the Hall of Fame, having earned 85.7% of the votes. Only 25 years old at the time, he was then the youngest player to have been inducted into the Hall of Fame.

The next couple of seasons were a disappointment for Damo da Rosa. He failed to post significant finishes on the Pro Tour, and indeed only made it to Silver level in the Pro Players Club. As such, he strongly considered quitting, and start playing a different game instead.[8] However, the 2014–15 season was a successful one. Although he didn't finish in the top eight of any Pro Tours, he made the top eight of three Grand Prix events, winning one, and put up a strong 13th-place finish at Pro Tour Dragons of Tarkir. Most of his top finishes during this season were with the deck called Esper Dragons, to which he credits the revitalizing of his Magic career.[8] At the next season's Pro Tour Battle for Zendikar, Damo da Rosa posted his 10th career Pro Tour top eight, a figure only Jon Finkel and Kai Budde had reached before him. Damo da Rosa's renewed success culminated with an amazing 2016–17 season, where he at Pro Tour Aether Revolt picked up his eleventh top eight, surpassing Budde, before claiming his second Pro Tour title at PT Hour of Devastation, simultaneously becoming the Player of the Year for the first time in his career. In December 2018, it was announced that Damo da Rosa would be one of the 32 players joining the upcoming 2019 Magic Pro League.

Paulo Vitor Damo da Rosa has been a long-time writer of the game. He joined Star City Games as a writer after his top eight finish at the 2006 World Championships and later moved to ChannelFireball, which he left in July 2019. He is often considered among the best Magic strategy writers, but has also written other articles, such as on the life of a pro player,[11] and about what to do when playing in your first Pro Tour.[12] Additionally, he has made the occasional Magic Online draft video, and has served as a commentator on coverage.[13]