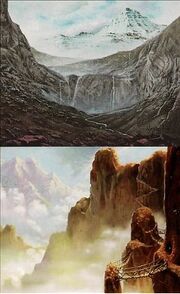 The Pardic Mountains. Art by Rob Alexander and Sam Wood.

Pardia is a mountain region on the continent Otaria on Dominaria. It is located south of Krosa.[1]

The large mountain range of the Pardic Mountains stretches across the center of the continent from the edge of Krosa in the north to Wirewood Forest and the Daru Plains in the south. The mountains were home to a variety of species, including dwarves, several tribes of human barbarians, firecats and other wild beasts, plus a number of goblins that were largely restricted to the Skirk Ridge.[2] Notable people from the mountains include Kamahl, Jeska and Balthor.

By the time of the Time Spiral crisis, the human barbarians of the Pardic range had become extinct, but the Skirk goblins continued to eke out a meager existence; at least one of the goblins' mines endured into later centuries, isolated enough from the surface world that its inhabitants had no knowledge of Otaria's devastation.[3] The fate of the dwarves is unknown.