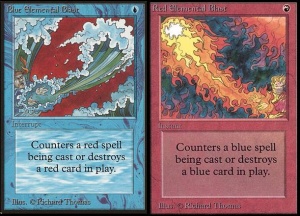 The Elemental Blasts, an early mirrored pair from Alpha.

Pairs, in Magic: The Gathering, are any two cards that are more often than not featured in the same set and share a number of characteristics, such as card names, mana costs, rarities, card types (and, if applicable, creature type and power/toughness), and abilities or effects. Pairs of cards may be mirrored pairs or matched pairs.

A matched pair (or parallel pair) is a pair of cards that are of the same color and the abilities refer to another enemy color (or an allied color or another allied color).[1] Examples of matched pairs include Disciple of Grace and Disciple of Law as well as Aven Smokeweaver and Treetop Sentinel.

R&D calls mirrored cards "reflections". Nowadays they appear at a much lower rate than in early Magic.[5]

A meld pair is a pair of meld cards which can meld into a single creature. Since two cards of a meld pair do not need to sharing any characteristics they are not pairs in the traditional sense.