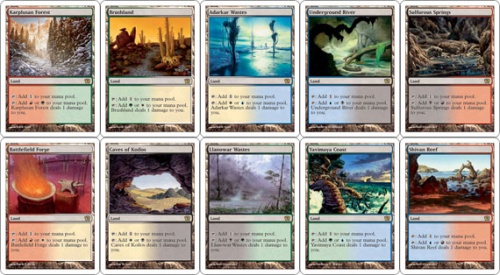 Pain lands is the term that typically refer to the land cycles first printed in Ice Age and Apocalypse. However the term can be applied to every land, which deals "pain" damage to you every time you tap it for colored mana.

They provide two different colors of mana for 1 damage, but can also be tapped for colorless mana without taking damage.

There is a cycle of five lesser-known pain lands from Tempest. They work exactly like the original pain lands, but are also taplands.[1]

In addition there exists the Grand Coliseum, which can tap for mana of any color.

In Mirrodin, five artifacts were printed that resemble the original pain lands from Ice Age.

Modern Horizons continued the pain talisman cycle with an enemy colored set resembling those from Apocalypse.

Odyssey had a cycle of mono-colored pain lands with a threshold ability. They cannot produce colorless mana, but can be sacrificed for their threshold effect.

Hour of Devastation has a cycle of mono-colored Deserts. They can produce colorless mana and can be sacrificed for their ability.

) can produce one of two colors when you pay 1 life and can later be sacrificed to draw a card.

Modern Horizons added an enemy cycle in the article "Lands on the Horizon" hence the nickname.[2]

Most pain lands deal damage to you when activating. This damage is a separate effect and can be prevented without losing the mana. However, some pain lands require you to pay the life, before getting the mana.