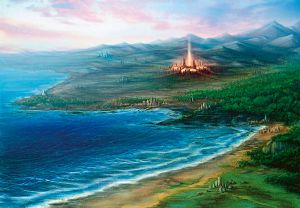 Otaria is a long and thin continent, running North-South, on Dominaria. It lies east of Jamuraa, south of Shiv and west of Terisiare.[1] It is the primary location for the Odyssey and Onslaught blocks.

Otaria did not figure into any tales until after the Phyrexian Invasion (save for its northern subcontinent Tamingazin).[2] It had survived that war relatively unscathed and was one of the first areas to recover and grow powerful once more. As a result, many of the survivors from other regions of Dominaria sought refuge on the continent. Despite all of this, many of Otaria's cultures were warlike and barbaric, ruling by terror and arena combat.

A century after the Invasion the Mirari appeared there, initiating a destructive war that devastated much of the continent. This sent its aven population fleeing to Benalia.[3]

At least four groups of humans called Otaria home, including the nomads of the Daru Plains, the Pardic barbarians, the Krosan druids, and the people of the Cabal.

Besides humans, Otaria was also home to many races, including dwarves, goblins, centaurs, giants, ogres, and gorgons, as well as several found nowhere else, such as nantuko, cephalids, and the various species of aven. Viashino are native to Otaria's subcontinent Tamingazin, but are a reclusive species and were not referenced in Odyssey or Onslaught blocks.[4] After the Invasion, numerous other races migrated to the continent in search of new homes, among them elves and minotaurs.

Many of Otaria's people were mutated into bizarre forms by the Mirari's influence. It's unknown if all of these mutations bred true, though crookclaws at least survived into the Time Spiral era.

The continent also had an incredibly diverse (and spectacularly dangerous) range of wildlife. Dragons, wurms, firecats, anurids, griffins, lhurgoyfs, orggs, and a vast array of other beasts menaced Otaria's people. Zombies, vampires, specters, and other undead were disturbingly common thanks to the Cabal. Later in Otaria's history a plague of slivers was unleashed on the continent thanks to the Riptide Project. In addition to these monstrous creatures, normal animals (squirrels, bears, elephants, etcetera) were also common.