From MTG Wiki
(Redirected from Ornithopter)
Jump to: navigation, search

The first creature to bear the type was Ornithopter in Antiquities (first printed with the type in Ninth Edition). Other examples include Roterothopter, Thopter Squadron, and Drill-Skimmer.[1] 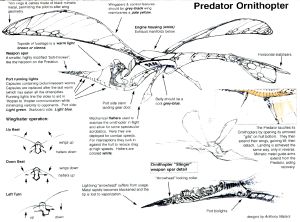 Thopters were among the first devices worked upon by the brothers Urza and Mishra. They started out as Thran devices salvaged by Tocasia's team, then the brothers worked on them to make them more efficient and deadly. Used as transport, they were used frequently in the earliest stages of the Brothers' War straight through to the end.

At the the time of the Phyrexian Invasion, ornithopters were employed on the flagship Predator.[2]

Aether-fueled thopters are fabricated and used in large quantities on Kaladesh, the home plane of Chandra Nalaar.

As head of the Azorius Senate, the planeswalker Dovin Baan introduced thopters for surveillance in Ravnica.

Magic's ornithopters are based on the real world devices of the same name.[3] The word "ornithopter" comes from the french "ornithoptère",[4] itself constructed with the ancient Greek words "ornithos" (meaning "bird") and "pteron" (meaning "wing").

As artifact creatures didn't use to have creature types, "Thopter" became a shorthand for a small flying device; and later designers used it as a root word to graft epithet to. Only two fake words were created using the "thopter" basis (Roterothopter and Telethopter), before card names started referring to Thopters directly: Thopter Squadron was the first to solidify Thopter as the generic name for these devices.