Orim was one of the core members of the Weatherlight crew.[1] She served as the ship's chief healer, having been trained in the Samite arts at the university of New Argive, where she also first met Hanna. Aboard the ship, Orim's duty was to treat the various injuries the ship's warriors picked up during their adventures. She played a key role in saving the crew in Mercadia (where she learned to use Cho-Arrim water magic) and also helped significantly during the Phyrexian Invasion when she found a cure for the Phyrexian plague. She survived the war and ultimately returned to Mercadia to be with her love, Cho-Manno.

Oriss, Samite Guardian was a woman who followed the Samite tradition founded in Mercadia by Orim; she may have been a descendant. 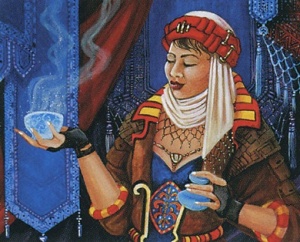