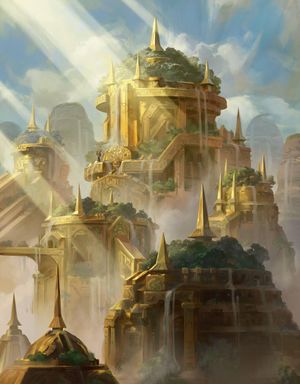 Orazca, the Golden City as depicted in token for City's Blessing.

Orazca, the legendary Golden City, is an ancient metropolis hidden in the uncharted jungles of the continent of Ixalan, which is located on the plane of the same name.[1] Orazca housed a powerful item, called the Immortal Sun. It is said that who succeeds in controlling this city will wield the greatest power of the plane.

Orazca was the Sun Empire’s capital for many centuries, and tribute from across the breadth of Ixalan was brought to adorn its palaces and temples. Gold covers nearly every building in the city, and jade inlays reflect the influence of the ancient merfolk who shared Orazca with the humans of the empire. For centuries, the earth was closed up over the golden city, hiding its secrets and its treasures from all who sought it. For a long time, three golden spires were its only visible signs where they rose above the forest floor.[2]

Orazca was abandoned after emperor Apatzec Intli was gifted the Immortal Sun by its guardian and misused it.[3] He wielded the artifact without any wisdom or restraint and the city was ruined. The Immortal Sun was taken away from the humans and gifted to the merfolk River Heralds instead. It still remained in the floor of the Sanctum of the Sun of the Tower of Triumph. The Sanctum was guarded by Azor's Gateway.[4]

The merfolk River Heralds had taken it on themselves to defend the Golden City since they believed that no one should have the power that lay within. To protect its secrets, they only vaguely knew where it was, but not the exact location. They had been making sure no one would get there for centuries. In the end it was Kumena, one of their own, who breached the security.

The race for Orazca[edit | edit source]

Kumena was the first person to reach the golden city in centuries. He seated himself in the Threefold Temple at the pinnacle of the city. He awoke the city and the creatures within. Among the creatures which had been held in stasis during Orazca's long hibernation, were the enormous elder dinosaurs. Each of these monsters embodied one aspect of the magic of the land.[5][6]

Kumena was bested shortly after his ascension by the combined efforts of the vampires Vona and Mavren Fein. They quickly threw him out of the window of the Tower of Triumph.[7]

After the vampires of the Legion of Dusk, came Huatli and her Sun Empire compatriots, Angrath and his pirate crew, and the unlikely pair of Vraska and Jace. While the four factions struggled above them to claim the sun's power for themselves, Vraska and Jace met with its creator, the ancient Sphinx planeswalker Azor. Learning from Azor that Ixalan was originally intended to be Nicol Bolas' prison, Jace remembered his confrontation with the dragon on Amonkhet and how he had glimpsed that Bolas' plan focused on Ravnica. Vraska and Jace hatched a plan to infiltrate Bolas' organisation, with Jace taking Vraska's memories to allow her to deliver the Immortal Sun to Bolas and maintain his trust. Vraska used the spell taught to her by Bolas, resulting in the Sun being seized through a planar portal by Tezzeret.

After the Immortal Sun was taken away by Tezzeret, the Legion of Dusk departed, following a furious Elenda of Garrano back to their home of Torrezon. With Angrath, Vraska, and Jace's departure from Ixalan the various groups of pirates following them also departed, along with the River Heralds. The abandoned city was claimed by Apatzec Intli III, who proclaimed a new age of conquest that would now target Torrezon.[8][9]