For other uses, see Onslaught (disambiguation).

Onslaught is the first set (and the only large expansion) in the Onslaught block. It is the 27th Magic: The Gathering expansion and was released on October 7, 2002. The prerelease was September 28–29, 2002.

Onslaught, like its following expansions in the Onslaught block, Legions and Scourge, featured a theme that focused heavily on "tribal" cards, or cards that are concerned with creature types.[3][4] The set contains 350 black-bordered cards (110 rare, 110 uncommon, 110 common, and 20 basic lands). Onslaught's expansion symbol is a stylized morphed creature.[5]

Onslaught was sold in 75-card tournament decks, 15-card boosters, four preconstructed theme decks and a fat pack.[6] The packs featured artwork from Jareth, Leonine Titan, Arcanis the Omnipotent, Grinning Demon, Blistering Firecat and Kamahl, Fist of Krosa. The prerelease card was a foil Silent Specter. The set was accompanied by the novel of the same name.

A continuation of the storyline developed in the Odyssey Cycle, Onslaught and the Onslaught Cycle are set on the continent of Otaria on the devastated plane of Dominaria, approximately a century after the events of Apocalypse of the Invasion block.[7][8] Kamahl has relocated to the Krosan Forest with the Mirari and becomes a druid of Krosa. The power of the Mirari begins to work on the forest, mutating its residents and growing some of them to gigantic proportions. Meanwhile, Kamahl's sister Jeska is transformed by foul Cabal healing magic, into Phage, a pit fighter whose touch brings death. The illusionist Ixidor discovers his new powers of reality sculpting. Ixidor uses his new power to create the angel Akroma.

Because Magic Online needs to represent all the tokens in the game, art needs to be created for even the most insignificant tokens. For those, Magic Online is the only place it appears.[12][13] 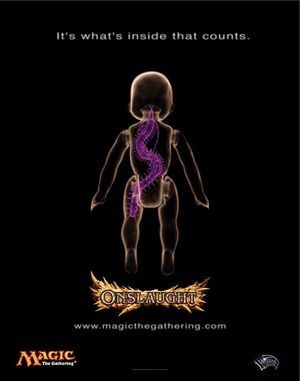 Tribal and creature types were a prominent theme in the Onslaught block.[3][14] Some creature types bled into colors other than their normal colors (e.g., Festering Goblin, a black, non-red Goblin), for more design space and variety.[15]

Dragons have a small presence in Onslaught, with the only Dragon creature cards being Quicksilver Dragon and Rorix Bladewing (and an additional one enchantment dragon-creature-token-creating card in Dragon Roost). Dragons would go on to form a theme in Scourge, the third Onslaught block expansion.[20]

In addition to the tribal theme, Onslaught features a number of cards, such as Erratic Explosion, that foreshadow the "cost matters" theme that is more fully explored in Scourge.

Onslaught reintroduced the static keyword ability cycling and featured a number of mechanics, some of which were novel, including:[21]

The creature types Anteater (retroactively) and Mutant were introduced in Onslaught. The creature type Lord was used in this expansion at the time of printing but was later removed.

Onslaught has one mirrored pair.