For other uses, see Odyssey (disambiguation).

Odyssey contains 350 black-bordered cards (110 rare, 110 uncommon, 110 common, and 20 basic lands). Odyssey's expansion symbol is a representation of the mirari.[4] Alongside Torment and Judgment, the second and third expansions of the Odyssey block, Odyssey was a graveyard-focused ("graveyard matters") expansion.[5] All the colors interact with the graveyard and use it as a resource, though green and black are the strongest graveyard colors. Previously, the graveyard rarely affected gameplay, but Odyssey 's cards forced players to constantly keep track of both graveyards at all times. For Odyssey, a new story began in a new setting with a new cast of characters.

Odyssey is set on the continent of Otaria on the devastated plane of Dominaria, approximately a century after the events of the preceding set, Apocalypse of the Invasion block.[6]

The Odyssey block storyline features desert nomads and bird (aven) warriors of the Order; the highly advanced underwater Mer Empire of the cephalids; barbarian and dwarves of the Pardic Mountains; and the centaurs, druids, and other creatures of the Krosan Forest. Each of these civilizations struggle to survive day by day, a fact off which the Cabal, an occult and sinister organization, led by the Cabal Patriarch and includes members such as Braids and Chainer, that controls most of the land and its wealth, benefits, as it operates pit fights for entertainment of the masses and, for the one lucky pit warrior who survives, fame and fortune.

The Order, structured like an army, counts among its leaders the militaristic Kirtar, Pianna, Teroh, and Eesha, and strives to break the Cabal's iron fist over the populace. Meanwhile, the Mer Empire, led by Aboshan and his wife Llawan, and advised by Laquatus, ambassador to the Cabal, scheme for absolute control of the continent by flooding the continent and killing the "inferior air-breathers". The Krosan Forest, having survived the plague of Phyrexians, grows more self-sufficient and hostile to outsiders; but, it also has a peaceful side to its existence, with figures such as Thriss and Seton being comparably more receptive of outsiders, one of whom will be Kamahl, the protagonist of the storyline cycle and, during the events of the Odyssey novel, is a young Pardic barbarian and warrior proficient with weapons and fire magic who seeks glory within the pits of the Cabal.

In leaving behind the Pardic Mountains, where age-old territorial skirmishes between the barbarians and dwarves continue to rage on, Kamahl leaves his sister Jeska; and, in an attempt to make a name for himself, Kamahl will forge new alliances, make new friends, lose friends, and irrevocably change his fate and fortune as well as that of the continent, in no small part due to the alluring and mysterious Mirari, a magical orb that calls out to all who gaze upon it and fills their heads with delusions of grandeur and dreams of conquest. 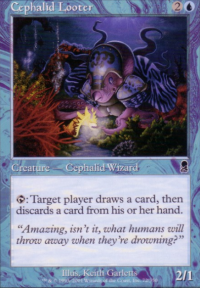 While by no means comparable to the power level of the Urza block expansion sets but also incomparable to the dearth of power in Masques block, Odyssey and its subsequent expansion sets were moderately powerful. However, it nevertheless received a mixed reception from players, who were "forced" to play Magic with the graveyard in mind.[9]

Magic writer Abe Sargent of StarCityGames.com wrote that, of 350 cards, of which 20 are basic lands, only four — Wild Mongrel, Psychatog, Upheaval, and Roar of the Wurm — were good.[10] However, he noted that the expansion was influential in establishing the graveyard as a relevant zone of the game. D. Gran, also of StarCityGames.com, however, listed Braids, Cabal Minion and Entomb as tournament-worthy cards from the set.[11]

Magic readers and forum-goers noted that Odyssey was a welcome departure from non-interactive and unfun Magic; however, it was also noted that Odyssey and Onslaught blocks were, to an extent, dominated by blue decks or decks containing blue.[12]

The 1/1 Spirit token with flying for Kirtar's Wrath only appeared in Magic Online.[15]

Odyssey introduced the graveyard-related keywords Flashback, which allowed players to replay instants and sorceries with the ability one more time for their flashback cost, and Threshold, which conferred some sort of bonus if and when the permanent or spell's controller had seven or more cards in his or her graveyard. Odyssey was the first set in which protection from all colors (Iridescent Angel), creatures (Beloved Chaplain), enchantments (Tattoo Ward), and instant and sorcery spells (Devoted Caretaker) were printed.

Cards with flashback featured a tombstone icon, an indicator, in the upper-left-hand corner of the cards.[2] so as to facilitate playing with cards with the graveyard-active ability. Flashback would be revisited in Innistrad block, but the tombstone icon was not featured on cards after Odyssey, with exception to the reprinted Call of the Herd and Judgment's Valor, from Time Spiral. This was, in part, due to the change in card frames between the Scourge and Mirrodin expansions.[16][17]

In addition to the "graveyard matters" theme, Odyssey had a minor token subtheme, as reflected in the number of token-generating cards, and a significant number of cards with activated abilities involving discarding cards from one's hand or sacrificing permanents.

Odyssey block is said to be the spiritual predecessor of Innistrad block due to the thematic similarities, namely, the emphasis on the graveyard.[18] Interestingly, both blocks share the mechanic Flashback.[19]

Odyssey features 15 cycles,[21] many of which are allied-colored cycles. 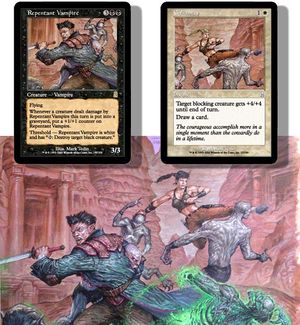 Odyssey has no mirrored pairs.