From MTG Wiki
(Redirected from Odunos)
Jump to: navigation, search 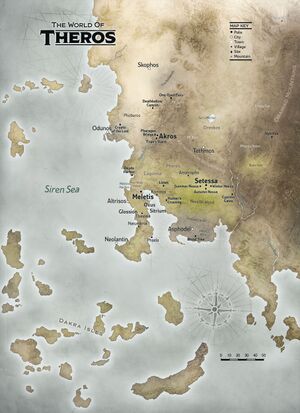 As a plane where mankind is carving out a place for civilization in the wild, Theros has three main cities, or "poleis" (singular polis [9]), born from relevant areas of the now-defunct Archon empire, with fewer, smaller settlements here and there:

Meletis, inspired by Athens,[10] is the polis of learning, magic, and progress. It is a city-state of progressive thinkers, pious thaumaturges, and wise oracles on the Coast of the Siren Sea. Meletis was born from the defeat of tyranny, and to this day it retains a spirit of the triumph of free thought over brutish force. Meletians pride themselves on their great temples to the gods, their thaumaturgical academy, their great works of architecture, and for their Reverent Army. The Twelve, a council of philosophers headed by Perisophia, serves as the ruling body of Meletis.

Akros, inspired by Sparta,[10] is a polis high in the mountains, which serve as a shield between its holdings and the rest of Theros. The Akroans are half-mythical even within their own time. They are known to be the most feared warriors of Theros. They have lived and died by the spear in the name of countless kings, hardening their armies generation after generation by fostering a culture that revolves around perfecting the body and the mind for combat. The current king and queen of Akros are Anax and Cymede. Gideon Jura, originally known as Kytheon Iora among his people, was also an Akroan.

Setessa, inspired by Themyscira (DC Comics/Pontus),[10] has a layout resembling the rings of a tree, which radiate outward from the Temple of Karametra at its heart. Swaths of forest alternate with family dwellings and other civic structures. Roads are winding and narrow and usually not wide enough to accommodate a cart. Rope bridges provide easy foot travel through wild spaces. Setessa encompasses a sprawling area on the border between the Nistos Forest and the open chaparral. Anthousa leads Karametra's Council of Warriors. She is considered the god's closest advisor and de facto ruler of the city.

The shrine of Nykthos is the gateway to and of Nyx. On this sacred ground, the worshippers can see their gods most clearly.[15]

At the end of the world, the sea drains off a sharp edge and formes an epic waterfall. At the top of the waterfall, there is a massive olive tree growing up out of the water. This tree is the shrine to Kruphix, the enigmatic god of horizons.[16]

The Nessian Wilds are home to beasts, hydras, snakes and centaur coursers.

Oreskos is the central domain of the leonin. It lies in a rocky river valley in a remote region of Theros. It is ruled by Brimaz, the Leonin King.