From MTG Wiki
(Redirected from Nezumi)
Jump to: navigation, search

Rats are small, omnivorous rodents belonging to the genus Rattus. These common and prolific creatures can be found in many planes, and are often plague - and disease carriers (Pestilence Rats, Diseased Vermin). Rats often appear in large numbers.

The first card to bear the creature type Rat was Plague Rats in Alpha. All Rats are black, sometimes with Red as second color. They are primarily associated with two types of effects:

Wharf Rats were found in port cities and other places in Golthonor, like Balthesa. They were responsible for the death of Xarl’s sister Init. Other Rats hide in bogs, sewers or crypts. On Otaria they were known to prey on graves.[2] 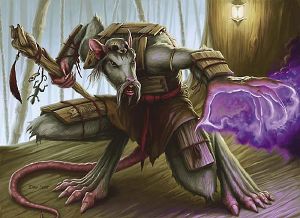 Nezumi Bone-Reader from Champions of Kamigawa

Nezumi are a race of anthropomorphic rats native to Kamigawa.[3][4] They live in the bogs of the Takenuma swamp and on the outskirts of human cities like Numai, sometimes raiding those cities for supplies or fun. They often have the ninja class. Some Nezumi shamans use incantations to summon and control insects to swarm and distract their enemies.[5]

The dungeons of Volrath were infested with Rabid Rats. The Oracle en-Vec used the Rats of Rath in the scrutiny of entrails.

The sewers of the Undercity of Ravnica are infested by rabid Sewer Sirens. They mesmerize their victims, urging them to pet their furry snout. They don't attack unless a hand is put in their mouth.[6]