New Phyrexia is the third set in the Scars of Mirrodin block. It is the 55th Magic: The Gathering expansion and was released on May 13, 2011.

New Phyrexia contains 175 cards (60 Common, 60 Uncommon, 35 Rare, 10 Mythic, 10 Basic Lands), including randomly inserted premium versions of all cards in the set. The set concludes the story that began in Scars of Mirrodin, with the Phyrexians defeating the Mirrans and taking control of the plane of Mirrodin. Like the cards in the two sets before it, the cards of New Phyrexia are watermarked with either faction's symbol,[3] but the ratio of Phyrexian to Mirran cards significantly favors Phyrexia. This showcases the progress of the Phyrexian invasion and is a reversal from the ratio as it was seen in Scars of Mirrodin.[4] In a similar fashion, the Phyrexian keyword mechanics of Infect and Proliferate spread into colors that did not get cards with these mechanics before. The expansion symbol was the Phyrexian symbol again, which also heavily featured in the art.[5] Several familiar creatures show up in a compleated version, and several favorites were redone.[6][7] The set showcases Karn, as a planeswalker and Father of the Machines.[8][9][10]

Just like Mirrodin Besieged before it, New Phyrexia features a cycle of basic lands.[11] Half of them depict a scene inside the Phyrexianized core of Mirrodin, while half of them contain references to artifact lands from Mirrodin.[12]

The set was spoiled in its entirety on April 19, 2011, before the spoiler season on magicthegathering.com began. This was the result of the "Godbook", which contains all cards of an upcoming set, being leaked. Godbooks are sent to magazines for review purposes before the release of sets. In this case, the godbook was sent to Lotus Noir, which passed it on to pro player Guillaume Matignon for reviews. Matignon was the World Champion at the time. Matignon in turn shared it with Guillaume Wafo-Tapa and two other players in his group, one of whom leaked it on the internet.[17] Consequently, all four players involved were suspended by the DCI for a year and a half.

It came not in the form of a noble struggle, a fair contest of warriors clashing will against will, but as a wave of unstoppable slaughter. Mirran partisans resisted bravely, using their wits and magic to fend off the onslaught that originated from inside their own world. But their efforts were for naught. Phyrexia is victorious. Mirrodin now goes by a different name: New Phyrexia.[18][19][20] 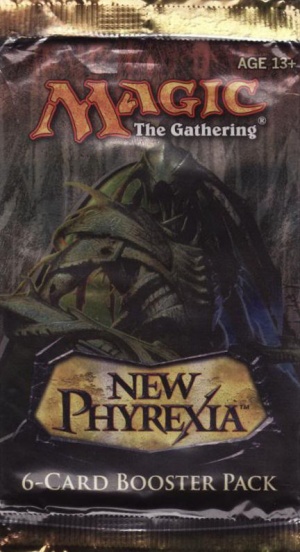 Suture Priest and a version of Pristine Talisman (with the Mirrodin Pure expansion symbol) were previewed at the Mirrodin Besieged Game Day.[24] The prerelease was May 7–8, 2011, the launch party on May 13–16, the Magic Online release on May 30 21, 2011. The Game Day was held on June 11–12, 2011. The promotional card given to participants at the Prerelease tournaments was Sheoldred, Whispering One, one of the five powerful Phyrexian praetors.[25] The launch party promotional card was Phyrexian Metamorph, and the Magic Game Day promotional card was a full-art Priest of Urabrask (top-8 participants received a full-art foil Myr Superion). The Buy-a-Box card was Surgical Extraction.

Regular boosters of New Phyrexia come with a bonus sixteenth card that is either a "tips & tricks card", a creature token from New Phyrexia, or a poison counter (which is subtle different from the poison counters in the previous sets).[26] These bonus cards display on their reverse side one of 14 advertisements for organized play programs, other Magic products such as fat packs and intro packs, the Magic books library, Magic Online, UltraPro products, or various Wizards-run, Magic-related websites (such as community.wizards.com). 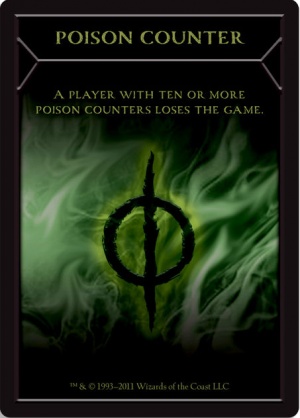 The New Phyrexia tokens in numerical order are:[27] 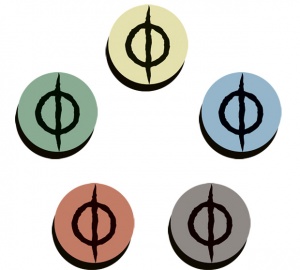 New Phyrexia introduces five new mana symbols, referred to as "Phyrexian mana".[3] These symbols resemble a mark of Phyrexia on a colored background, one for each color of mana, and indicate a cost that can be paid with either 2 life or one mana of the respective color. This mechanic also heralds the return of colored artifacts, previously seen in Future Sight and the Esper shard from Alara block.[28] Because these symbols were all identical except for color, there were multiple complaints from color blind players, although this was somewhat mitigated by the appearance of the standard symbols in the effect boxes.

The set has a small subtheme of "splicers", 1/1 creatures that put a certain number of 3/3 Golem artifact creature tokens onto the battlefield and grant abilities to them.[3] Another small subtheme was nicknamed the "blood tax", and referred to spells such as Vapor Snag which resembled other utility cards (in this case, Unsummon), but with an additional rider that caused a loss of 1 life.[3]

The rules term "poisoned" introduced in Mirrodin Besieged returns. A player is poisoned if they have any poison counters. 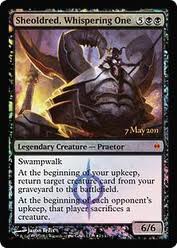 New Phyrexia has two monocolored event decks. The number of rares was increased from seven to eight.[33]