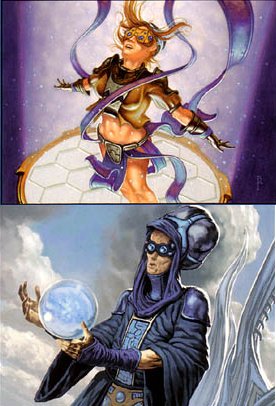 The Neurok are a human ethnic group who live in crude settlements of tin on the shores of the Quicksilver Sea.[1] Many are in a state of subservience to the Vedalken Empire, who use them as guards, lab assistants, couriers, and laborers, as well as scouts and explorers throughout Mirrodin—due to their inherent paranoia, the vedalken trust their Neurok slaves far more than they do their own kind. As a people, the Neurok highly value knowledge, and like the vedalken are in constant pursuit of it; many seek out blinkmoth serum for its mind-expanding properties. Many of these folk train as wizards, spies, thieves, and other professions that afford them a chance to glean hidden truths.

Shorter and more slender than other humans of Mirrodin, the Neurok have pale skin that ranges from light pink to faint gray. They have less metal (tin or silver, probably) studding their bodies than other Mirrodin humans. Their hair is brown or red, but is rarely seen beneath the elaborate multi-eyed headdresses many of their kind wear. Neurok favor elaborate dress such as form-fitting silver armor or flowing blue robes, as well as the aforementioned headdresses or goggles.

Medev was a prominent Neurok settlement until its destruction by Memnarch.

After The Vanishing, given the weakened state the Mirran civilizations, the Neurok aggressively rose to prominence in Lumengrid, forcing the Vedalken to cast off their prejudices for their very survival.