Mystery Booster is a Magic booster set, designed for Chaos Draft. It has two editions. The Convention Edition was released on November 7, 2019, and the Retail Edition on March 13, 2020. The set contains mostly reprinted cards from earlier sets.[3] Each Convention booster also contains a test card which may be used in draft, but not in constructed play. The set is not Standard-legal.[4] 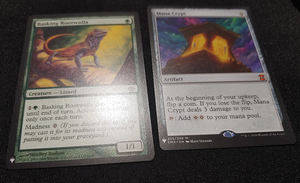 The idea of the Mystery Booster is that it is a product that you don't know what it is until you open it up; the mystery is a feature of the product.[5] The main set contains 1,694 cards of equal rarity.[6][7] However, 30 card have the mythic rare colored expansion symbol, 152 rare, 452 uncommon and 1060 common. The reprints are from all throughout the game's history, going as far back as Mirage.[2] There are also cards from supplemental sets. In contrast to regular Chaos limited, which has many set-based synergy cards that don't work in that environment, this curated set maintains the chaos feel but it lets decks actually be functional, good and fun to play. The cards have a white planeswalker symbol in the bottom left, meaning that these are fresh prints designed to look like the original cards. Apart from the added planeswalker symbol, the reprints are "straight pick-ups", meaning that Wizards of the Coast literally used the original card file to print them. That is a different thing than printing a new card, with updated rules text, which is how they normally make cards.[8][9]

Mystery Boosters contain 15 cards. There are two versions, one for GPs/conventions and one for local WPN stores.[10] Each Convention pack has 2 commons/uncommons of each color, 1 multicolored common/uncommon, 1 common/uncommon artifact/land, 1 special slot, 1 rare/mythic rare with the M15 card frame and one pre-M15 card in its original frame.[11] Each of the 14 boosters slots from the main set of 1,694 cards has its own print sheet of 121 possible cards.

The Mystery Booster was first teased at WeeklyMTG by Blake Rasmussen on October 10, 2019.[12][13] More info was revealed on November 7 at MagicFest Richmond.[14]

The convention packs contain a pretend "playtest card" in the special slot that seems more like part of an Un-set. Gavin Verhey described this as "Chaos Draft meets Future Sight".[11] These 121 so-called test cards feature black and white card faces that look like they have been stickered on cards with a regular card frame of the appropriate color. Test cards are not meant for Constructed play, but may be used in Chaos Draft. There is a total of 121 test cards (one print sheet[15]). Test cards don't have a designated rarity.

The Retail Edition of the Mystery Booster fills the special slot with one of 121 possible foil cards. These foil cards are different cards than those found in the main set. There are no never-before-done foils.[2][16]