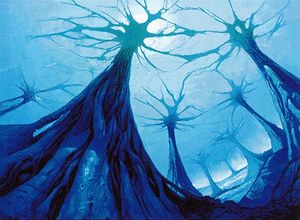 Mycosynth was a strange metallic, fungal organism created due to corruption of Mirrodin with Phyrexian oil. Mycosynth was released in spores throughout the plane, changing metal to flesh, and consequently caused metallic growths in the skin of organic beings while simultaneously converting artifact creatures into living organisms. Large towers of the substance built up in Mirrodin's Core in elaborate lattices while golems composed of the substance also came into being (whether spontaneously or by Memnarch's will is unknown).