From MTG Wiki
(Redirected from Moxes)
Jump to: navigation, search

A mox (plural: moxes, sometimes moxen[1][2]) is a piece of jewelry, usually containing a gemstone, that can produce mana. The most well-known comprise five of the pieces of the Power Nine.

The word "Mox" was derived from the English slang word "Moxie".[3] This word has long been associated with energy and vigor. The origin of this word traces back to the early 1900s when America's most popular softdrink was called Moxie.[4]

The original five Moxes are rare artifacts which produce one of the five colors of mana. The original Moxes account for five of the Power Nine cards from the Alpha, Beta, and Unlimited sets (the earliest editions of Magic: The Gathering, printed in 1993) and thus are widely considered to be among the most powerful (and expensive) cards in the game. The cause for this is the ability to play multiples in a single turn, giving an unbalanced, extremely powerful mana acceleration which led to them being restricted in Vintage and completely banned in every other format very early in the game's history. All five of the original Moxes (along with the original art for Mox Diamond) were illustrated by Dan Frazier. Due to the original Moxes appearing in the Alpha and Beta releases of Magic: The Gathering they are also present within the Collectors' Edition and International Collectors' Edition sets (both also released in 1993).

Apart from the original five, other Moxes have been released in various sets over the years. Each of these additional Moxes were attempts by the game designers to create more balanced versions of the original Moxes by way of adding additional costs beyond the zero mana casting cost. Despite these additional costs, the first three of the 'balanced' Moxes are considered to be quite powerful and have found their way onto various banned and restricted lists over the years.

The original Moxes were unavailable on Magic Online until the online only set Vintage Masters debuted in June 2014. These original Moxes (along with the rest of the Power Nine and several other Vintage staples) use the Modern card frame and have alternate artwork by artist Volkan Baga, previously used on awards given to winners of the Vintage Championship tournament series.[1] The original printings of Chrome Mox and Mox Opal appeared online along with the rest of their initial release sets, Mirrodin in 2003 and Scars of Mirrodin in 2010 respectively while Mox Diamond eventually debuted online along with the rest of Stronghold in 2009, long after its initial paper release in 1998.

Gleemox was a Magic Online-only promo card that was given away with the announcement of the Gleemax project. They were distributed on Magic Online by Gleemax. The card doesn't show up in gatherer because it's not a real-world card.[5]

The original Moxes and Mox Diamond are on the Reserved List by Wizards of the Coast and thus won't be physically reprinted again. An earlier version of Official Reprint Policy allowed for special premium reprints of cards found on the Reserved List, allowing Mox Diamond to appear as a reprint in the From the Vault: Relics set, released in 2010. Negative collector reaction to its reprinting led to an amendment to the Official Reprint Policy preventing any further physical reprints, but allowing for the release of Reserved List cards on Magic Online.

A card tentatively named "Crystalline Mox" or "Crystal Mox" was playtested during the development of Mirage but for reasons unknown was never released. According to artist Dan Frazier the artwork he originally created for Crystalline Mox was ultimately used for Enlightened Tutor (Mirage): "I was commissioned to do the artwork for the card 'Crystal Mox.' When I spoke to Sandra, I said,'Oh, that's nice, since I've done the art for all the other Moxes.' She responded: 'You did the other Moxes?' Back then, when the game was still new, the art directors weren't as involved in the rest of the process. They never printed Crystal Mox, but the artwork that I did for the card is the artwork on Enlightened Tutor. You can kind of see what I was going for if you noticed the jewels of each color in the Tutor's crown."[7]

The Moxes were a powerful collection of mana-infused gems owned by Liana of Minorad. Liana gave them to Kristina of the Woods and Jared Carthalion during her duel with Ravidel at Minorad so that he would not take them. Ravidel claimed various times that the Moxes had once belonged to him; at the battle with Jared, Kristina, Altair of Coloni and Caliphear the Nightmare against Ravidel at the Dueling Chasm of Golthonor, Ravidel used the Mox Jet, Mox Ruby, and Mox Sapphire to activate the Mox Beacon. 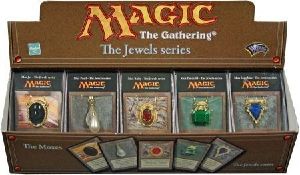 In 2007 five extremely rare pieces of actual jewelry were produced for the Italian market to resemble the Moxes. Each necklace comes in a display box that has the corresponding Mox's art printed on the front.[8]