For other uses, see Morningtide (disambiguation).

Morningtide is the second set in the Lorwyn block. It is the 44th Magic expansion and was released on February 1, 2008.[4][5]

Morningtide contains 150 cards (50 rare, 40 uncommon, and 60 commons). The theme of this expansion is tribal, based on class rather than race.[6][7][8] Its expansion symbol is a depiction of a sun rising in the morning, or a flame. Morningtide is the second and final set of Lorwyn block. The following set, Shadowmoor, would not be part of the Lorwyn block, as originally announced, but the first set of a new block, codenamed "Jelly" and "Doughnut". However, these two blocks would rotate into and out of official tournament formats as though they were a single block.[9] Morningtide introduced Tribal Equipment, Prowl, Reinforce, and Kinship. The set was accompanied by the novel of the same name, written by Cory J. Herndon and Scott McGough.

The set continues the "celtic fairytale" setting of Lorwyn.[10][11][12] Rhys, once a prominent hunter among the elves, has two big problems. He's being blamed for a cataclysmic event that killed many of his fellows. Even worse, his horns are broken, which makes him ugly. This makes him doubly damned in the eyes of his society. Knowing his skill and reputation, they are pulling out all the stops to bring him to their vicious brand of justice. As if he didn't have enough to worry about with his own skin, he has to deal with the Aurora.

Morningtide was sold in 16-card booster packs, four preconstructed theme decks and a fat pack.[13] The decks and the fat pack contained a Pro Tour Player Card. The booster packs featured artwork from Sigil Tracer, Pyroclast Consul and Earthbrawn. The prerelease tournaments for this set were held on January 19–20, 2008.[14] The promotional prerelease card for Morningtide was Door of Destinies with alternate art, a card that helps emphasize creature types, the theme of Morningtide.[15] The promotional release card was Earwig Squad which shows the Prowl mechanic.[16][17] The launch party was held on February 1–3, 2008.

Like Lorwyn boosters before them, boosters of Morningtide come with a bonus sixteenth card that is either a rules card or a creature token from Lorwyn or Morningtide. One face of the Morningtide bonus card has one of five different rules tips or is one of fourteen different creature tokens, meaning either one the eleven tokens printed in Lorwyn or one of the three printed in Morningtide. The other face has one of six advertisements for organized play programs, magicthegathering.com, and Shadowmoor.

The Morningtide tokens are:[18] 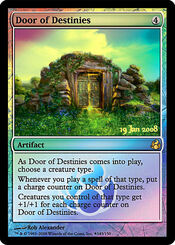 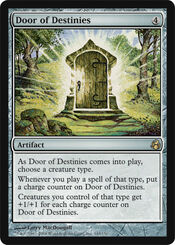 Morningtide expands upon Lorwyn's flavor and theme by shifting the tribal focus away from the eight races of Lorwyn (kithkin, merfolk, faeries, elementals (flamekin and greater), goblins, giants, treefolk, and elves) to the five classes of Morningtide (soldiers, shamans, wizards, warriors, and rogues).[19][20]

Morningtide has a number of spells with clash that you return to your hand if you win the clash.

A few Morningtide cards have abilities that say that certain other creatures you control come into play with additional +1/+1 counters on them.

A number of Morningtide cards tell you to choose a creature type, then base their effect on how many permanents of the chosen type you control.

The new mechanics introduced in Morningtide are Prowl, Kinship, and Reinforce. Prowl and Kinship are class-specific keywords for Rogues and Shamans, respectively, and Reinforce appears on multiple non class-related cards.

Morningtide has one mirrored pair.

The following cards have been reprinted from previous sets and included in Morningtide:

Morningtide has one functional reprint:

The following common cards feel like functional reprints but are not: