Modern Masters was the first set in the Modern Masters series. It was a booster-based compilation set containing cards legal in, and intended for, the Modern format. It was released on June 7, 2013.[3][4] Several cards had changed rarity, had new art or were printed in the then current card frame for the first time. 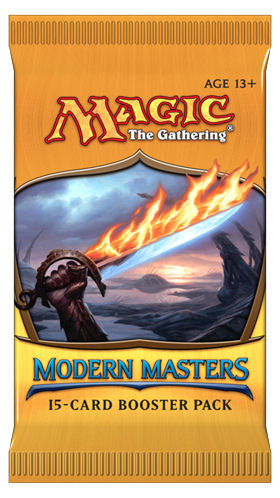 Modern Masters is a 229 card set consisting of reprints of cards originally printed between Eighth Edition and Alara Reborn.[5][6] Thus every card is legal in the Modern format and other formats in which the sets are legal from which the cards originate. It was designed to fill the need of reprinting certain cards to make them more easily available to current or prospective Modern players, without re-introducing those cards into Standard. The set also does not contain any cards which are on the banned list of the Modern format at the time of its design.

Modern Masters is exclusively booster-based, thus no satellite products such as Preconstructed decks are branded with the set. Each booster contains 15 playable cards: 10 commons, 3 uncommons and one rare or mythic rare, and one foil card of any rarity replacing the basic land which would normally be found in a booster as Modern Masters does not contain a run of basic lands.[7] The 16-card boosters (the sixteenth card is a marketing card) feature artwork from Vedalken Shackles, Sword of Fire and Ice and Dark Confidant. Due to the higher expected average value of the cards contained in a booster and the lower print run, the MSRP of one booster of Modern Masters was set to $6.99 (with the MSRP of a booster of the current draft set being $3.99). Due to the higher MSRP booster displays only contain 24 packs, which is also the number required for a regular draft (three boosters for each of eight players), as the set was designed specifically for draft. A number of cards also change rarity from their original printing as mythic rare wasn't introduced until the Alara block, and/or receive new artwork.[8]

The set was only be printed in English, but was distributed worldwide. UltraPro marketed sleeves and a card box especially designed for Modern Masters.[9]

There are two cycles in Modern Masters:

The set comes with 15 tokens and an emblem, some of which are printed for the first time.[13]