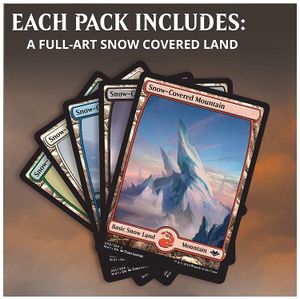 Modern Horizons contains 254 cards (5 snow-covered basic lands, 101 commons, 80 uncommons, 53 rares, 15 mythic rares[6]), and includes randomly inserted premium versions of all these cards. In addition, there is a Buy-a-Box card numbered #255/254. This set introduced new cards into Modern without them ever being legal in Standard. It contains 209 new cards and (excepting the snow basics[7]) only reprints which previously weren't legal in Modern.[8] For this, it was rigorously playtested by Play Design.[9] The Buy-a-Box card is also a new-to-Modern reprint. The powerful new card options, some with old mechanics, are mixed with flavorful updates for favorite characters.[10] The snow-covered basic lands appear in the land slot of Modern Horizons boosters.

Modern Horizons was originally dubbed as "Timespiral / Planar Chaos 2" in concept due to set complexity.[11] Mark Rosewater has called it a a "love letter" to the Time Spiral block.[11] It isn't an entry level set because of its many returning mechanics. There was no story support for the set.[12]

Modern Horizons was sold in slightly larger-than-usual 17-card boosters (one card being a double-faced token, and one being an art card[13]), and in a Draft Pack. The boosters feature horizontal artwork from Ayula, Queen Among Bears, Serra the Benevolent and Urza, Lord High Artificer.[14] The set was printed for as long as demand held.[15] It was released on Magic Online on June 13, with a booster price of $6.99 (regular booster packs cost $3.99). It will not be featured on MTG Arena.[16]

The sixteenth card in the boosters is a double-faced token creature card or an emblem:[18][19] One out of every four tokens is foil (but not double-sided).[20] 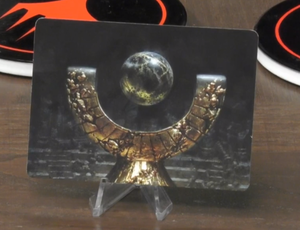 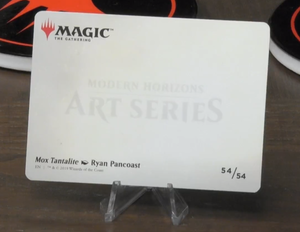 Back side of the art card

The seventeenth card in the boosters is an art card with horizontal full art from one of the regular cards in the set.[18] The card back is mostly blank, with some collector's info. There are 54 different art cards.[19]

There are no new mechanics in Modern Horizons.[21] Instead, the set features more than forty non-evergreen returning mechanics.[22] R&D decided that the set could use any mechanic already in Modern up to Dragons of Tarkir.[23]

A major mechanic is changeling, used to make a cohesive set (like it was used in Lorwyn previously).[24][25] Snow is also a major mechanic.[25]

Like in Future Sight before, the set features some "Mix-and-Match" cards, combining two different non-evergreen keywords on the same card: Feaster of Fools, Hogaak, Arisen Necropolis and Throes of Chaos.[27]

Modern Horizons has nine cycles, two of which are double cycles.

The Mirran swords mega-mega cycle gets its first allied colored additions. Though, the cycle is not complete with Modern Horizons.[33][27]