New Phyrexia is the metal plane previously known as Argentum and Mirrodin, repurposed in its Phyrexian Compleation.[2]

Argentum was an artificial world created by the planeswalker Karn, and renamed after the Mirari by its warden Memnarch. The outer sphere of the plane has a circumference of 1400 kilometers, with a diameter of around 450 kilometers.[3] Mirrodin's environments and inhabitants mixed organic and metallic.[4] From sharp razorgrass that grew fast enough to impale unfortunate humans, to oceans that flowed with an unusual form of quicksilver, even the most delicate flower was made of metal. The intelligent beings who walked Mirrodin were no less strange, an odd mish-mash of muscle and steel. Artifact creatures also walk the planet. Some seem to have come about naturally, while some have artificially been created.

Across the surface of Mirrodin, there were five Lacunae, one for each color, in each different landscape on the artificial world.

According to Phyrexian Field Reports there now exist three spheres in Mirrodin: the surface, the interior, and the furnaces. The Phyrexians are currently working on adding spheres to it to presumably recreate the original Phyrexia.[5]

The Moons of Mirrodin[edit | edit source]

The plane has five suns (also called moons by some of the plane's inhabitants; it is also notable that each different satellite was regarded with its own folklore by the peoples of Mirrodin), one for each color of mana, though the green sun was absent until late in Mirrodin's history. The names of the moons are: Bringer, the Eye of Doom, Ingle, the Sky Tyrant, and Lyese.

The plane was originally created by the planeswalking golem Karn as the world Argentum.[18] Karn created the plane from an existing but desolate space, using the space as raw materials in the construction of his artificial world.[19][20]

Karn left one of his creations, Memnarch (a golem created from the Mirari) in control of the plane when he went out to explore the Multiverse. Unfortunately for Argentum, Memnarch was driven mad by Phyrexian oil[21] that Karn accidentally left in Galdroon Palace, his home on the plane. After being infected, Memnarch was a being forever changed and wished to become a planeswalker like its creator. Memnarch transformed Argentum into Mirrodin, essentially a gigantic terrarium with its own food chain and environmental systems, built to supply organisms that could potentially yield sparks.[22] Memnarch used soul traps to abduct inhabitants from other planes. The abductions went on for centuries. Once Memnarch found such a potential planeswalker, he would take its spark and implant it into himself to achieve planeswalker status.

At some point, mycosynth grew upon the plane, a product of the oil, changing metal to organic material, including Memnarch himself. Soon thereafter, Memnarch discovered blinkmoth serum, or lymph, which greatly diminished his decaying sanity, and he became addicted to the substance. Though Karn wished to intervene, Memnarch blocked him from his own world, thinking in his madness that Karn was already there.

Glissa, Bosh, and Slobad and the Kaldra avatar journeyed deep within Mirrodin's core to confront the insidious Memnarch. However, with a single spell, Memnarch seized the avatar and turned it on Glissa and her companions. Kaldra's avatar relentlessly pursued Glissa into the Tangle, destroying everything in its way. Finally, at the Radix, Glissa's destiny became clear. As rage and despair overcame her, Glissa's body called forth a great column of green mana from Mirrodin's core, annihilating the avatar in the process. That mana became the fifth sun of Mirrodin. Memnarch was then deactivated by Glissa. Mirrodin was thereafter guarded by Glissa, Slobad, and Geth.

When Glissa eventually killed Memnarch, all the existing soul traps were destroyed. Upon Memnarch's death, Karn could finally return to his plane. He could restore the souls of everyone that died, using the power of Glissa's spark to cast the spell. The kidnapped inhabitants were returned to their long forgotten homes. Almost all of the remaining trolls, half of the elves, and a third of the humans disappeared without a trace. This was known as "The Vanishing" or the Sun's Toll by their descendants, who remained on the plane.[23]

As Karn had unknowingly brought the glistening oil to Mirrodin, it planted a virus on Mirrodin that slowly spread. The first to be infected had been Memnarch. Unbeknownst to most Mirrans, Phyrexia was rebuilding itself,[24] using the metal structures of their world as its host substrate.

Some Metal-infused inhabitants of Mirrodin were a perfect breeding ground for the spread of Phyrexian corruption, which made them even stronger at the same time that corroded their minds and bodies. An example of this would be the Darksteel Colossus turning into the Blightsteel Colossus or the Etched Oracle turning into an Etched Monstrosity [25][26] As the nascent civilization of Phyrexia expanded in secret, it struggled to evolve a unified purpose, and the danger for the plane of Mirrodin grew until it evolved into New Phyrexia. 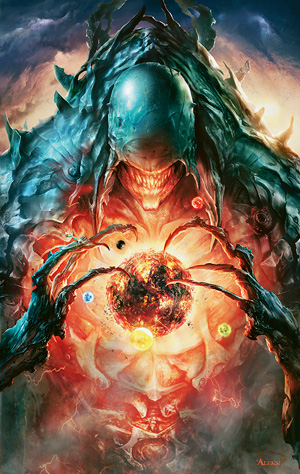 The Grand Compleation is achieved.

Unlike in its previous incarnation where Phyrexia fueled itself with colorless artifact mana and the black mana of decay and death, this time the Phyrexians infiltrated all five colors of mana and thus brought war on all fronts. However, this had the unintended consequence of factionalizing the Phyrexians based on their color-alignment.[27][28] And so each alignment gained a Praetor to oversee that color.[29] They are:

The white-aligned Phyrexians, under the guidance of Elesh Norn, are a very literalist religious organization called "The Machine Orthodoxy".[31] They worship a form of scripture called the Argent Etchings, but divide themselves into smaller sects. Three of the most prominent sects include The Flesh Singularity, The Porcelain Legion, and the Disciples of Karn. They seek to unify the Multiverse as Phyrexia in either a perfect hierarchy or level playing field.

The Flesh Singularity try to achieve total unity by literally flaying the creatures that inhabit the lands and sewing them together. The Porcelain Legion repurpose and adapt creatures by implanting white metal plates into their bodies (considering all white phyrexians have this porcelain like metal on their bodies), while the Disciples of Karn previously held Karn himself hostage, in hope of pushing him ever deeper into insanity to glean leadership out of his madness.

The blue-aligned Phyrexians are led by Jin-Gitaxias from the ruined halls of Lumengrid.[32] They hold themselves to higher degree of perfection than the other factions, and pursue what they refer to as "The Great Synthesis". They conduct experiments in various laboratories scattered across the Quicksilver Sea, described as "slaughterhouse like", creating new life forms and technology. They are the most organised group so far, with at least ten observable ranks. One of their great experiments is The Meldweb] in which the original Pools of Insight are filled with the brains of hundreds of sentient beings all networked together.

Ezuri, a former bandit turned rebel leader, was captured and compleated by Jin-Gitaxias' forces and turned into the Claw of Progress, putting him in direct conflict with Glissa.[33]

The black-aligned Phyrexians are out for total and utter corruption, slaughter and enslavement, led for the moment by Sheoldred.[34] She is at the top of a food chain of thanes, who are all fighting a war of succession to be named the "Father of the Machines". The thanes beside her are:

The red-aligned Phyrexians built the Furnace Layer of Mirrodin, based on a similar layer of Old Phyrexia.[35][36] Their primary function was to tend the forges present there, building weaponry and recycling failed Phyrexians and Mirrans alike. During the war days, they emerged to the surface in the mountains of Mirrodin, and expanded into the surface. While the majority of these Phyrexians still dwell on the depths of the world, several now populate the Oxidda Chain, beasts designed in the fashion of Mirran animals.

Red Phyrexians differ from all others in the way that they have strong emotions and individuality, and as such developed empathy for the Mirrans. While still brutal creatures, their empathy proved strong enough to allow them to let Mirran survivors to dwell on their plane, treating them as if they didn't exist. To hide this secret, as well as to avoid having to deal with other factions, Urabrask demanded that all access to the Furnace Layer be sealed from the other factions, isolating himself and his servitors; the surface Phyrexians in the mountains serve as guardians to the entrances to the Furnace Layer. For the most part, the other factions ignore the Quiet Furnace, with the exception of the Progress Engine, which is paranoid about them.

The green-aligned Phyrexians were among the first to strike, dominating the Tangle quickly.[37] Like all Phyrexians, the members of the Vicious Swarm believe that flesh is weak, but unlike the other phyrexians they believe that New Phyrexia should progress in a more natural way, based on the roles of predation, allowing the strong to emerge triumphant over the weak. They believe that artificial engineering should be restricted to make predators more efficient, and that sentience and sapience are curses, inadequate when compared to the raw power of instinct. Lacking any sort of organization whatsoever, they are merely a massive variety of creatures that kill each other for the purpose of selecting the strongest.

While Vorinclex is the praetor of this faction, it is Glissa who remains the true power. Depending on what source is more canonical (the field guide or the Quest for Karn novel), she is either loyal to Karn or disdains him.

Benzir, a sylvok before compleation, is aligned with this faction, although he is pursuing goals independent of it. 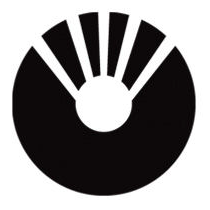 The Mirran Resistance are the remnants of the Mirrans that continued to be alive or uninfected even after the compleation of Mirrodin. They are composed mainly of Auriok, Vulshok, goblin, and Leonin survivors together with the last remaining Moriok, Neurok, Sylvok, Elf, Loxodon, and Vedalken inhabitants of the plane.[26] Most of the survivors who are at the later stages of phyresis often die in the camps while they are cared for by those who are less sick, others being the Incorruptable, who are immune to the effects of phyresis. The resistance have no centralised leadership and instead are led by Koth, pre-Theros Elspeth Tirel and the late planeswalker Venser, and others in their respective encampments below:

Aside from those mentioned above, other notable Mirran survivors include Farris, Jor Kadeen, and Kara Vrist.

The Mirran Resistance continues to fight for the eventual purification of Mirrodin. The Sylvok named Melira appeared to be the key in achieving their goal. The Resistance managed to locate Karn and, through the sacrifice of Venser, healed him from his phyrexianization and restored his spark. Karn soon left his creation behind in order to seek infestations of Phyrexia on other planes he had visited. The Resistance hoped to use the power vacuum that had been created after Karn left Mirrodin to plunge Phyrexia into civil war.

It was a vain hope. Elesh Norn took control over the domains of Urabask and Sheoldred, with the praetors (along with the much despised Tezzeret) gathering to crown a new Father—or Mother—of Machines.[30]