Mirage is the ninth Magic expansion. It was released in October 1996 as the first set in the Mirage block. 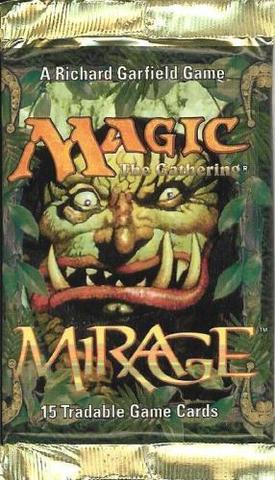 The set's rarity break down was 110 commons, 110 uncommons, 110 rares, and 20 basic lands. This expansion introduced Fifth Edition rules (5th Edition was released in March 1997). Mirage's expansion symbol is a palm tree, to symbolize the tropical aspects of Jamuraa.[3]

Mirage non-basic lands have a dull green text box, which it shares with Visions non-monocolor lands.

The development of Mirage began with a group of playtesters, including Bill Rose, who independently created their own cards and mixed them in with the Alpha cards from 1992 through 1995. The set, which they initially called "the Menagerie", evolved over the years until it was finalized in October 1995. The African setting was devised by Sue Ann Harkey after the cards had been designed.[4][5] Mirage was one of the first sets that was developed for Sealed Deck play.[6]

Mirage was released on November 1, 1996. The print run is estimated at 400 million cards. The cards were sold in 60-card starter decks and 15-card boosters. The boosters showcased the art from the cards Polymorph, Taniwha, Maro, Jungle Troll and Grinning Totem. Each booster box contained 36 sealed packs, each starter box contained 12 starter decks. Each booster contained 15 cards: 11 commons, 3 uncommons, and 1 rare.[7] Mirage had two significant different printings: one dark print with a rough finish, and one light print with a smooth finish. The dark Mirage was printed in US, the light one in Belgium at Carta Mundi.[8]

This expansion began the first official block set with one large expansion being followed by two smaller expansions all tied together through card mechanics and setting. This model became the standard for the concept of "block rotation". Mirage introduced some changes to make the cards easier to read (including a slightly expanded text box and border, more visible power/toughness numbers) and reminder text.

Mirage stands apart from the rest of Magic for its tropical African-themed setting, outlining the three nations of Femeref, Zhalfir, and Suq'Ata.[9] The storyline begins with the disappearance of the planeswalker Teferi (who would later play a crucial role in the Weatherlight Saga and the Time Spiral block) and the three powerful spellcasters — Mangara, Jolrael, and Kaervek — who come looking for him, setting off the events that would lead to the Mirage War.

Mirage introduces the mechanics Flanking (a combat ability that gives blockers -1/-1 until end of turn) and Phasing (a confusing 'removed from play/Phased out' ability).[11] Flanking was frequently used to make 2/2 creatures for three mana worthwhile. Phasing was most often used as a drawback in this set, but it is now infamous for the complex rulings it inspired, especially when combined with enters-the-battlefield abilities that started appearing on many creatures in Visions.

Mirage included a large number of creatures with the Knight creature type, all with flanking and an activated ability, such as Cadaverous Knight and Teferi's Honor Guard. The set also included more multicolor cards than any set between Legends and Invasion, and the first enemy color cards for all pairs except black/green (which had received Dark Heart of the Wood in The Dark expansion).

Certain Mirage cards had additional creature types in Italian, Spanish, and German. Shauku, Endbringer counted as a vampire, Sidar Jabari as a knight. For the official version, this situation got cleared up by successive Oracle announcements and Grand Creature Type Updates.[12] 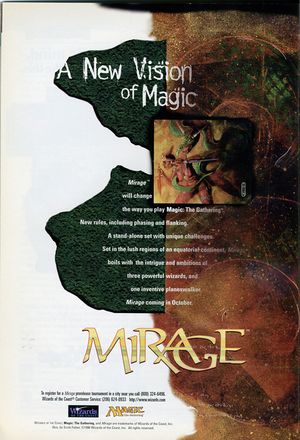 The following cards have been reprinted from previous sets and included in Mirage.