Minamo (Japanese: ; rōmaji: Minamo-in; literally "Water Surface Academy") was a wizard academy built around and above Lake Kamitaki near the waterfalls of the same name.[1] A major blue-aligned location on Kamigawa, the academy was comprised of both ordinary buildings and buildings held magically aloft. It was the first place where the kami manifested at the outbreak of the Kami War. 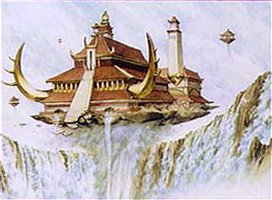 Above the Academy was located the soratami capital Otawara (Oboro), and the moonfolk frequently visited the academy—officially to share their wisdom, but actually to maintain control of the academy when using it to pursue their own secret agenda.

The Minamo Academy trained both archers and mages for the conflict between material and spirit worlds. The headmaster of the academy was Sensei Iki Hisoka; his deputy was Madame Azami, the Lady of Scrolls.

During the events leading to the climax of the Kami War, Choryu, a Minamo student and friend of Princess Michiko Konda, made a grave mistake when he killed Kobo, member of the Hyozan Reckoners and apprentice of Hidetsugu. Obedient to the Hyozan oath, the ogre proceeded to execute a complete reckoning for that crime. The ogre attacked the academy with his yamabushi hunters, defeated the guardian dragon Keiga, and destroyed the academy, killing anybody who got in the way. Some of the inhabitants escaped this fate, but Hisoka himself was decapitated (and consumed) by Hidetsugu.

Whatever was left of the Academy was further destroyed in the battle between O-Kagachi and the All-Consuming Oni of Chaos.

After the war, the Minamo School was rebuilt, as evidenced by the fact that Mariko, niece of the Brothers Yamazaki, was said to be studying at the Minamo.[2]