The Military League was a gaming program launched by Wizards of the Coast in March 1997. It was aimed at military Magic players, their dependents and civilians working for the US Department of Defense.[1]

League membership gave an official ranking, so the player could see how he stood in his service branch, or in the entire US Military. At the end of each season, the ten top guns from each branch would receive prizes exclusive to the Military League. Once registered, the player could duel others to increase his rank. Rankings were published in the The Duelist Sideboard. 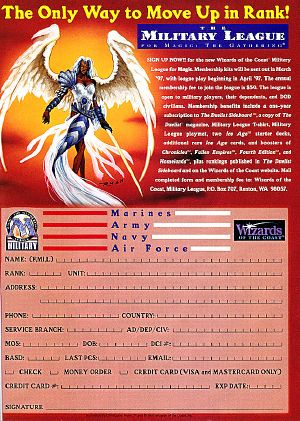 Membership in the league cost $50 per year, and included:

Volunteer organizers would monitor league play and report results, and could earn rewards based on how many matches they report. The League's rules were very similar to standard DCI rules, but had had some important differences. Ratings were tracked for the League, but kept separate from DCI or Arena ratings.