Mercadian Masques is the eighteenth Magic expansion and was released in October 1999 as the first set in the Masques block. It is notable for being the first set not protected by Wizards of the Coast's "Reprint Policy". 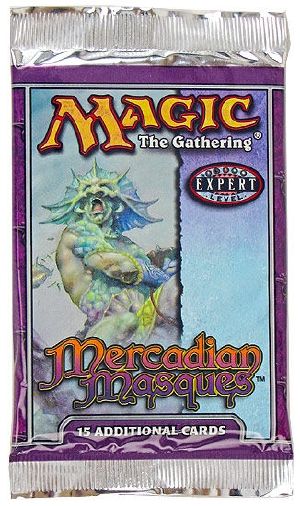 Mercadian Masques featured 350 cards (110 commons, 110 uncommons, 110 rares, and 20 basic lands). Mercadian Masques's expansion symbol is a stylized mask to evoke the intrigues, deceptions, and double dealings involved with the Mercadia storyline.[2] This was the first large expansion to use the new 6th Edition rules.

Mercadian Masques was sold in 75-card tournament decks, 15-card boosters and four preconstructed theme decks. For the first time ever, basic lands were among the randomly inserted foil-finished premium cards in the booster packs, enabling an all-premium deck. The packs featured artwork from Squee, Goblin Nabob, Cateran Slaver and Saprazzan Legate. This was the first set to have an accompanying fat pack, consisting of three boosters, a tournament pack, two premium cards, the Top Deck Magazine Mercadian Masques pullout section and the Mercadian Masques novel. For the first time since a long time, there was no Official Guide. The prerelease card was a foil Overtaker.

While the set was in design (at the time codenamed "Archimedes"), the book department named the book Mercadian Masques. Mark Rosewater mentioned at the time that it wasn’t particularly a good name, but as the name was for the book and not the expansion he felt it wasn’t really an issue. But then a number of months later, the Magic brand team decided that the expansion and the book should have the same name.[3]

The Weatherlight's troubles continue as it crash-lands on a strange new plane. The ship is attacked by the Cho-Arrim, who steal the ship. Finally, soldiers from Mercadia City arrive to arrest the crew. Meanwhile, Orim, who was captured with the ship, learns more about her captors. The Cho-Arrim are spiritual people who suffer greatly under the greedy Mercadians. Their leader Cho-Manno explains that he took the Weatherlight's arrival as a sign prophesying the return of the sky god Ramos and the end of Mercadian rule. Orim slowly becomes sympathetic to the Cho-Arrim's situation and attracted to their leader.

Mercadians are an evasive, aloof people: the nobles are hedonistic, apathetic, and lazy, while the commoners are selfish, grasping, and paranoid. Mercadian goblins are much larger and smarter than any the crew has encountered before, and they actually seem to be running the city despite their servile attitudes. Furthermore, a guild of professional assassins, thieves and horrors called Caterans roams the back alleys of the marketplace, ready to terrorize or murder anyone for the right price. The Mercadian magistrate unexpectedly offers Gerrard an unusual deal. A platoon of soldiers and Cateran mercenaries will be placed under his command to recover the Weatherlight. If the mission is successful, Gerrard may petition for both the return of his ship and safe passage out of Mercadia for himself and his crew. In the ensuing battle, the violent Caterans slaughter the Cho-Arrim indiscriminately.

Back in Mercadia City, Takara brokers a new deal with the magistrate: the crew will repair the damaged Weatherlight and restore its flying mechanisms for him in exchange for their freedom. Sisay, Hanna and Orim will travel to Saprazzo, a rival trade city inhabited by enlightened merfolk with the ability to switch between fish tails and human legs at will. There they will secure an artifact required to fix the ship, while Takara and the male members of the crew remain in captivity.

Mercadian Masques is not considered to be as high caliber as compared to the powerful sets of the Urza's block. Reportedly, the designers were extremely gun-shy following the runaway power of the previous block and dialed back the power a tad too much; the same phenomenon would take place between the latter-day Mirrodin and Kamigawa blocks. However, the set did produce some tournament-quality cards. Gush; Rishadan Port; Squee, Goblin Nabob; Waterfront Bouncer; Hunted Wumpus; and Food Chain have all seen various degrees of tournament play.

Unusually, Masques introduced no new keyword abilities to the game, although it did have several themes that were continued throughout its block.[4] These included:

The following 21 cards have been reprinted from previous sets and included in Mercadian Masques:

The following creature types are introduced in this expansion: Mercenary, Monger, Rebel, Spellshaper.

Each of the Mercadian Masques theme decks has at least one spellshaper, a theme of the set. The pre-constructed theme decks are: