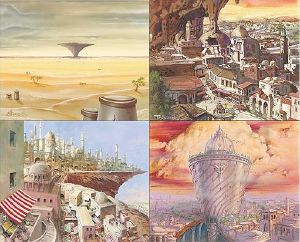 Located atop the bizarre upside-down Mount Mercadia, Mercadia City is the site where numerous Thran nobles were taken by the planeswalker Dyfed to save them from the political turmoil of their home during Yawgmoth's uprising. It is the largest settlement of any size on the plane of Mercadia. They were left in the care of goblins, who had reliable survival skills. Many years later, the Thran refugees built the powerful city of Mercadia. Essentially a trading empire, Mercadia is filled with many markets, where anything can be found to be bought and sold.

The rules of physics are bent in the plane, and no one can ever travel straight from east to west across the inverted mountain; rather, they will go in circles around the same blocks and marketplaces, unless they turn opposite of the direction they wish to go. It was ruled by a venerated magistrate, who is in fact a puppet leader secretly controlled by the Kyren, descendants of the original goblins who have increased intelligence and size compared to their ancestors. However, during the Weatherlight's flight from the city, the dragon engine Ramos intercepted Volrath's ship, Recreant, and destroyed the vessel. A revolution was then triggered that swept the city.

Lower Mercadia, a lesser settlement of traveling traders, sits underneath the shelter of the upside-down mountain's top. Large piles of trash thrown from the upper city land in vast heaps, forming a makeshift barrier surrounding the bottom of Mount Mercadia. Criminals are occasionally executed by being buried under piles of waste and refuse dropped from above.