Meld is a keyword action introduced in Eldritch Moon and means to turn two meld cards on the back side into one oversized card, if you control the proper pair.[1] 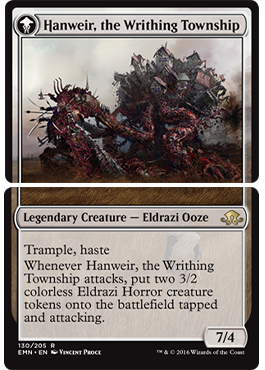 Two cards melded into one

The design of Meld was inspired by the Un-card B.F.M. (Big Furry Monster) and the unreleased mechanic Link.[2]

Two cards that meld, change into one oversized card on the battlefield. That single card only exists on the backs of the two other cards.[3] A melded card is a single permanent represented by two cards. If it is one creature, it behaves like any other creature does. It can attack and block. It has abilities that work. It can be enchanted or equipped. You can put counters on it. And so on. You can think of it as one big card while on the battlefield. A single spell that says "Destroy target creature" takes out the whole permanent.

One of the two cards has the actual keyword action in its rules text, the other card only has the reminder text: Melds with (card name).

Whenever the melded card leaves the battlefield, both cards go, and they each turn front face up again.

There are three cards with meld in Eldritch Moon.[4]

Meld
To turn two members of a meld pair so their back faces are up and combined into one oversized Magic card. See rule 701.36, “Meld.”