From MTG Wiki
(Redirected from Mardu)
Jump to: navigation, search 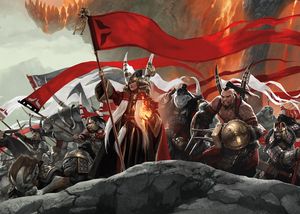 One of the five Clans of Tarkir, the Mardu Horde clan admires the ancient dragons' aspect of speed. Their color wedge is

black.[1][2] Their swiftness is symbolized by the wing of the dragon.[3]

The Mardu Horde are fearsome warriors that live for the heat of battle and thrive on the rocky wastes of Tarkir. The clan's main encampment is at the cliffs where an ancient dragon died.[4] They routinely conduct vicious raids against the other clans and regularly combine lightning magic and archery to strike at their enemies.[5] Shu Yun saw them as a necessary part, since they spread far and wide and killed dragons that would otherwise grow to become a threat.[6]

Since the lands they inhabit offer little substenance, the Mardu live through raiding the territories of other clans for much needed resources. The clan is divided into the warriors and the laborers. While the warriors are the most respected social class, the laborers is generally left on its own, and tends to have more representation in domestic matters than the lower classes of other clans. Although not every member of Mardu society rides to war, every Mardu abides by the warrior's code called the Edicts of Ilagra. The Edicts, inscribed on a collection of dragon-hide scrolls, govern the rules of honor and combat for Mardu warriors.[7]

The most common coming-of-age tradition was the choosing of a warname in an act of brutal honor. This usually involves the killing of an enemy in battle. The clan member then earned a war name, a new surname that usually takes the form of a compound word (e.g. Qorin Skullcracker, Jaidar Sharptusk). A Mardu who has not yet earned a war name is a "soft heel," while one who has is worthy of the term "warrior."

In the new timeline, diverging from the modern one a thousand years in the past by Sarkhan Vol saving Ugin from death, Alesha attempted to save her clan by attending to a meeting with the other khans, only for it to end disastrously as the dragons attacked. Thankfully, as she returned to her clan, she learned that Kolaghan, the brood leader of her lands, was not interested in leading or enslaving the Mardu, unlike the other tyrannical brood leaders, so Alesha and her warriors simply tossed her banners aside and followed the dragon as equals.[6]

In time, however, Kolaghan became increasingly brutal and domineering, forbidding words like "khan" similar to the other dragonlords. She and her brood claimed leadership over the Mardu by force, using their unpredictability to keep the non-dragons in line, creating a new Clan. Under the leadership of the dragons, the Mardu became increasingly barbaric, forsaking what honor they had possessed before.[8]

The Mardu ability word Raid and related cards are all based around a very fast, aggressive strategy for winning.[5] Raid gives an advantageous effect if you have attacked with a creature the same turn. In Fate Reforged the Mardu Horde featured Dash, instead.[12] When you pay a card's dash cost instead of paying its mana cost, the creature will have haste, so it can attack that turn. At the beginning of the next end step, you'll return the creature from the battlefield to its owner's hand.

(You may cast this spell for its dash cost. If you do, it gains haste, and it's returned from the battlefield to its owner's hand at the beginning of the next end step.)

Relationship with the dragons

The Mardu were largely irreverent to the dragons, regarding them as vermin. In the old timeline, the Mardu held the memory of dragons with scoffing disdain, taking the extinction of the dragons as evidence of their own merit. Often, they clashed with the lightning-breathing breed of Kolaghan, who were respected for their speed. To comabt these dragons, the Mardu adopted reckless tactics, like plunging on the back of a dragon from a chasm. Many would affix upward-pointing sword blades or spears to their shoulders, making them dangerous targets for diving dragons. The most daring would distract the dragons by riding in small groups, allowing the bulk of the horde to ambush the beasts.[13]