Manifest is a keyword action introduced in Fate Reforged. When you manifest a card, you put it onto the battlefield face down.[2][3] 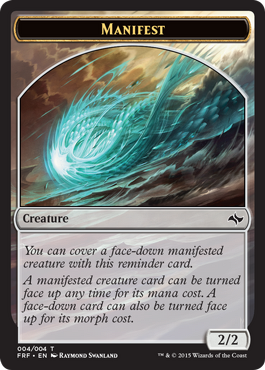 Flavorwise, manifest represents Ugin's draconic magic from Tarkir's past, rooted in concealment and deception. It was designed to feel like a proto-morph mechanic.[4]

While face down, a manifested card is a 2/2 colorless creature with no name, no abilities, and no creature types.[5]

Manifest
A keyword action that puts a card onto the battlefield face down as a 2/2 creature. See rule 701.34, “Manifest,” and rule 707, “Face-Down Spells and Permanents.”

Sorcery
Manifest the top card of your library. (Put it on the battlefield face down as a 2/2 creature. Turn it face up any time for its mana cost if it's a creature card.)