From MTG Wiki
(Redirected from Mana-Bird)
Jump to: navigation, search

Bird is a catch-all creature type for animals characterized by having feathers, hollow bones, and wings. They are usually capable of flight.

Birds in the Magic universe can be of tremendous size and quite intelligent, while some are even anthropomorphic. Natural birds are usually blue or white balanced creatures with flying. Many of them, being blue, have deck searching/drawing abilities. An exception is Birds of Paradise which is a Green, 0/1 with a mana acceleration-related ability.

The first creatures to bear the type Bird were Roc Hatchling and Circling Vultures in Weatherlight. Roc of Kher Ridges from Alpha, Osai Vultures and Mesa Falcon from Legends were later issued errata to become birds as well. The type Bird was eventually solidified in the Grand Creature Type Update.

On Dominaria, Aven used to be most prevalent on the continent of Otaria.[1] Lately, many have migrated to Benalia.

According to Otarian myths, the aven were created when eagles begged the Ancestor to make them human, with the Ancestor granting half the wish. On the other hand, some believe that the aven were refugees from another plane who settled on Dominaria, while others claim that they evolved naturally from birds such as the Suntail Hawk.

Otarian Aven resemble humanoid eagles, and are tall and strong, possessing arms, legs, and powerful wings capable of flight. Most aven live along Otaria's northern coasts around Balshan Bay as fishers, but many are also found inland on the Daru Plains and other Order-controlled regions. They are militant creatures who make up a significant portion of the Order's members. Many aven are accomplished warriors, wizards, or both. Around the time of the Time Spiral crisis, the aven were reduced to squatters in the continent's ruins.

Several of the surviving Aven relocated from Otaria to Benalia, where many adopted the Serran faith.

Although most Otarian aven resemble eagles, some are owl-like in appearance. "Owl aven" seem less militant than eagle aven, specializing as wizards. Some owl aven also inhabited the planes of Dominaria, Ravnica and the Shard of Alara known as Bant.

Some owl Aven can be found on Shandalar, acting as the Warden of Evos Isle in service to the sphinxes there.

As the Mirari's magic washed across Otaria, altering its inhabitants, many aven became taller and more muscular, with long, razor-like talons jutting from their wings. The most advanced of these mutants lost their arms, regressing into huge sentient raptors. On the other hand, mutant owl aven, known as crookclaws, also grew larger and sprouted talons from their wings, but retained independent use of their arms. The crookclaws' magical abilities were also enhanced by the Mirari's emanations. Crookclaws appear to have bred true after the Mirari crisis ended and survived at least until the time of the rifts. It is unknown if eagle avens survived as well.

Hulking, wingless, featherless avian humanoids with gray skin, legs of nearly solid bone, and limited intelligence, elen stand nine to ten feet in height. They are slow-moving creatures who serve as enforcers and infantry for the Order in Otaria.

Raypen are small, fragile, four-foot-tall bird-people with vestigial wings (whose magical feathers still afford them flight) and thin, withered-looking legs with prehensile feet. They serve as scouts and magical support for the Order in Otaria.

The royal family of Valeron on Alaran Bant consists of falcon-like aven.[2]

The Kathari are a race of scavenging vulture-people native to Grixis. They are in constant competition with the native necromancers for corpses, who sometimes let them act because they think they cleanse bad luck from the dead. Their religion, called Skive, states that only those dead whose skeleton has been completely cleansed from flesh have a chance to enter the afterlife. As such, the Kathari treat their scavenging lifestyle as a holy calling.

Amonkhet's Aven come in two varieties: ibis-like and falcon-like.[3] Unlike most Aven which are in fact birds, these Aven have human bodies, with only avian heads and wings. They live among the population of Naktamun and prepare for the trials of the five gods like every other race. These Aven delight in flying above their foes, using their superior mobility to confound and outpace their opponents.[4]

Unlike the Aven of other planes, the Aven from Tarkir are four-limbed: the clawed, feathered forelimbs are simultaneously wings and arms, much like the forelimbs of primitive birds. They are associated with the Jeskai Way, the Abzan Houses, the Sultai Brood and the Temur Frontier, having thrived after the extinction of the dragons. Abzan Aven resemble vultures and are an elite that serves the clan's Khan, Anafenza, the Temur Aven resemble ravens, and the Jeskai Aven are crane or falcon-like. Abzan Aven serve Khan Anafenza as her personal elite guards and are tasked with watching the Lookout Roost to prevent the Sultai Brood from attacking. Jeskai Aven serve Khan Narset, mostly taking the role of windscouts and becoming emissaries between the Jeskai and other clans; they are capable of seeing the enchantments that line the mountain routes and often live as hermits, flying in intricate patterns around the peaks as a form of meditation. Very little is known about Sultai and Temur Aven, but the former resemble rails and the latter ravens.

In the new timeline, Aven are found among the Ojutai and the Dromoka. Ojutai Aven have an honored place in their society since their wings allow them a better command over the body language of draconic. They are often used as translators by high-ranking dragons and the voice of Ojutai's personal translator carries the weight of the dragonlord himself. Among the Dromoka, Aven are integrated into the "family units" within the clan, living side by side with humans and ainok, calling each other equals and brothers. Additionally, some of the vulture-like Aven have allied themselves with Silumgar.

Other types of Birds[edit | edit source]

Aesthir are giant birds that were used by the Kjeldorans of Dominaria's Ice Age as flying mounts for their elite skyknights. Aesthir were highly prized by the Kjeldorans, with mistreatment or disrespect towards them being heavily frowned upon. They gradually became extinct after the Ice Age ended and their natural habitat disappeared. It is said that Oriel Kjeldos was the first to train an Aesthir, and that Márton Stromgald was the first to use them in combat against the goblins.

In Theros cranes are white aligned domesticated birds that fly into the battlefield to supply soldiers with weapons. In contrast, in the Plane of Mountains and Seas they are wild, red aligned fire breathing birds, albeit very distinct from the local phoenixes. Both seem to allude to mythology: cranes are depicted as "soldier-like" by Pliny the Elder, while in Chinese mythology the Vermilion Bird is a distinct entity from the Fenghuang (Phoenix).

Mesa Falcons are dangerous birds on Ulgrotha that visit the Serra Aviary. Serra's Falconers are able to communicate directly with the birds. Mardu Horde falconers train massive falcons - which apparently are also Rocs - as aerial steeds, often decorating them with their wing-like banners, giving them "a fearsome four-winged appearance".

The Parea are large, flightless, carnivorous birds living in the east of Jamuraa. They were mostly wiped out in the civilized areas of the continent but remained a danger in the wastes where they would hunt in packs and prey on travelers. During the Keldon invasion of Jamuraa they were often found following the Keldon war barges looking for carrion and were therefore used to execute worthless prisoners, cowards, and traitors. The Darba are enormous relatives of the parea that would attack even well-armed Keldon encampments in search of food. They can grow upwards of twenty-five feet and are capable of picking up oxen in their beaks.

Perchers look nothing like normal birds, but more like flying squid. They were used by the Phyrexians and Rathi to relay messages across long distances, due to their parrot-like ability to memorize and repeat short phrases. New Phyrexia makes use of new types of bird. Most of them are White (Tine Shrike, Shriek Raptor).

Phoenixes are half-animal/half-elemental avians. They are capable of turning their body into fire and flame, and literally rising from their ashes, resurrecting themselves. They are seen on Dominaria in various fire-aligned regions (Shiv, Bogardan), Ravnica, Jund, and used to exist even on Rath. Some phoenixes are called firebirds.

Primocs are hybrids between birds and monkey-like beasts which were created by the Riptide Project. They have a natural inclination to serve wizards as familiars.

The Order of Midnight on Eldraine fly upon giant ravens.[5]

Ravens are also a manifestation of the mysterious Raven Man. 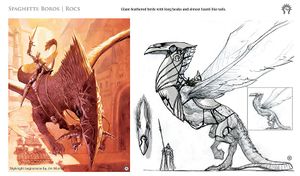 A Boros Roc rider of Ravnica

Rocs are humongous birds seen on Rabiah, Terisiare, Jamuraa, Ravnica and Tarkir. On Ravnica, the Boros use them as flying mounts for the Boros Legion.

Rukhs, also called "stonefeathers", are similar to phoenixes, except their base element is stone, not fire. They look like great vulture-like birds with leathery, dragon-like wings. They are native to Rabiah.

Creature types changed into Bird include:

Other bird species included in the Bird type[edit | edit source]

Some examples of other bird species included in the Bird type: