Magic Duels was a digital free-to-play Magic game that was first released in July, 2015 on Xbox One, iOS, and PC via Steam, with PlayStation 4 joining later in the year. It was the successor to, and evolution of, the Duels of the Planeswalkers series.[1][2] Unlike the Duels of the Planeswalkers-series, which were unconnected annual releases, Magic Duels didn't get replaced each year. Lead designer was Drew Nolosco. Updates were cancelled in june 2017, to make way for Magic Digital Next.[3] Digital support was ended on November 26, 2019.[4]

Magic Duels was free to download and free to play. The game focused on bringing in newcomers to Magic. Most of the learning came through situational tips as you played.[5] As you played the game, you earned gold which you traded in for booster packs. If you wanted to get cards quicker, you could also buy gold, but all gameplay content was earnable just by playing.[6] 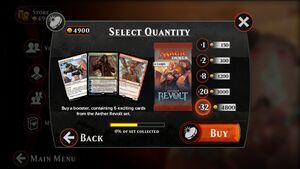 Magic Duels launched with the new storyline featured in the Magic Origins set and Magic Origins boosters available in the store. It continued to expand with regular downloadable content that reflected the latest sets. Four times a year, Magic: The Gathering released a block booster set; two sets per block, two blocks a year. Four times a year, those block booster sets would push down to Magic Duels as a huge card content update. All the cards stayed in the player's cardpool and all the boosters of earlier sets would be kept available in the shop.