The Deck Builder's Toolkit (Magic 2015 Edition) is a box set that was released July 18, 2014. It contains 100 basic land cards (20 of each type from Magic 2015), 85 fixed cards, 40 of 125 semi-randomized cards suitable for building several different Magic decks, and four 15-card booster packs from recent sets, a Deck builder's guide with tips about building the best Magic decks, a Magic "learn to play" guide and a full-art reusable card storage box. All the fixed and semi-random cards in the box are from M15, Theros, Born of the Gods and Journey into Nyx. Like the magic 2015 sample decks each toolkit contains several cards numbered 270 and higher that do not appear in Magic 2015 booster packs. These cards are legal for tournament play in any format that includes the Magic 2015 core set.[1] Each Toolkit contains at least one of each card numbered 270–284.

Each toolkit contains 85 fixed cards (together with the 100 basic lands). These are the five rare cards that don't appear in M15 boosters, followed by the rest of fixed content in WUBRG order: 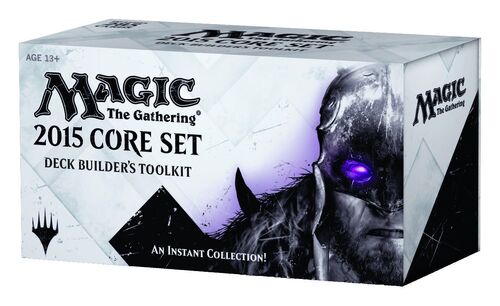 1 Eagle of the Watch

1 Pin to the Earth

1 March of the Returned

1 Fall of the Hammer

The semi-random portion of the Deck Builder's Toolkit consists of 4 groups of 10 cards (6 Commons and 4 Uncommons), each representing one of the 11 strategies lined out in the poster that comes in the box, separated by an Evolving Wilds:

1 Eagle of the Watch

1 Seraph of the Masses

1 Commune with the Gods

1 March of the Returned

1 Fall of the Hammer